Studio audience members at The Ellen DeGeneres Show got the surprise of a lifetime as Justin Timberlake sat down with the funny host for an exclusive hour-long interview on May 1. Things got even more exciting when the 37-year-old singer brought out his former 'NSYNC bandmates: Lance Bass, Joey Fatone, JC Chasez and Chris Kirkpatrick. Much to the crowd’s liking, the group took a trip down memory lane, which included playing a very revealing game of “Never Have I Ever.” During which, the Man of the Woods singer let out an insanely ‘00s secret. 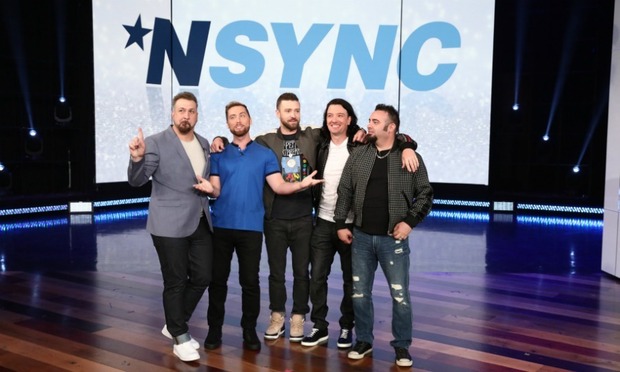 Ellen wasted no time once the party of five sat down. She kicked off the game by stating: "Never have I ever hooked up with someone twice my age." At that, Chris and Joey admitted that they had indeed done so. The next question was even better, with the Finding Dory star saying: "Never have I ever hooked up with a Spice Girl." Everyone said they had not except for one person: Justin! 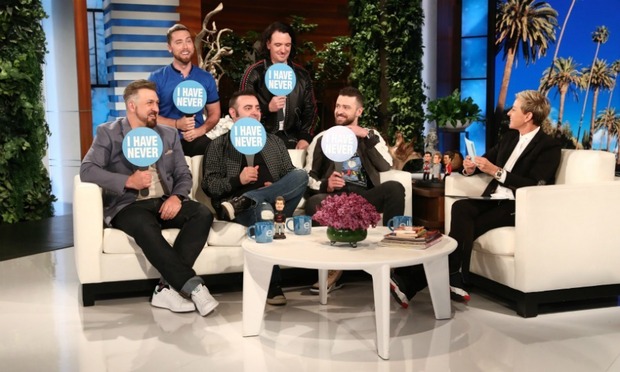 The former boyband played a rousing game of "Never Have I Ever" Photo: Michael Rozman/Warner Bros.

After hesitating, the Supplies crooner did in fact turn his paddle over to show “I have.” No further details were discussed but many were quick to think he was referring to the youngest of the group, Baby Spice. In 2004, Emma Bunton did an interview with U.K.'s Jonathan Ross and was asked about hanging with the 'baby' of 'NSYNC. She at first played coy but then did say, “We hung out and partied a bit and he was very sweet. He spoke about this first, ’cause otherwise I would not have said a word. He’s very sweet.”

#TBT to the day I met the #SpiceGirls in 1996. We had both just released our first singles (WannaBe/ I Want You Back) and no one in that airport knew who any of us were. #NSYNC @OfficialMelB

During what marked their first TV appearance together in quite some time (they performed on the MTV Video Music Awards together five years ago) the fivesome reflected on their past. Among other topics, they looked back on their embarrassing outfit choices and talked about how they stay in touch with a “ridiculous group chat.” Before stopping by Ellen's show, the boys were with her at their Hollywood Walk of Fame star ceremony. “I watched this band evolve over the years, and by that I meant I spent 10 minutes reading their Wikipedia page,” Ellen joked while speaking at the Hollywood event. The group was all smiles, as Justin thanked his mom, "beautiful wife" and "beautiful son" for being there.

Later on in the taping, Justin opened up about his wife Jessica Biel and three-year-old son Silas. Justin told a hilarious and relatable story about how, after a long night of performing, Silas gave him a very surprising morning wake up. “He gets out of his room in the morning and sneaks into our room. It’s very, very sweet,” he said. “And I was very, very tired…" Justin proceeded to rave about fatherhood while adding, “Anybody who’s a parent out there knows that it’s like you’ve never been more excited to be peed on.”