Lisa Marie Presley had the love of family, friends and fans as she honored her father Elvis ahead of the 40th anniversary of his death. The actress was joined by her eight-year-old twin daughters, Harper and Finley Lockwood and her 24-year-old son Benjamin Keough during a candlelight vigil held at Elvis’ former home, Graceland in Memphis, Tennessee on Tuesday, August 15. 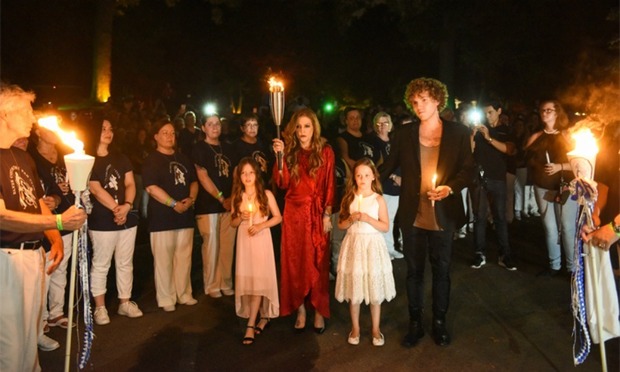 Lisa Marie and her children were joined by fans and friends during the candlelight vigil held at Graceland Photo: Elvis Presley Enterprises/Graceland

RELATED: Riley Keough on being related to Elvis Presley

Lisa Marie, 49, stood with fans during a candlelight vigil, that took place on day five of Elvis week and went into the early morning hours of August 16 – the day the singer passed after a heart attack in 1977. Lisa’s mother and the Hound Dog singer’s wife Priscilla Presley spoke to the crowd and expressed her gratitude for keeping the King of Rock n’ Roll’s legacy alive. On Wednesday, Priscilla took to Twitter to post photos of her and Lisa Marie from Elvis’ funeral with the caption, “Mourning.”

Absent from the event was Lisa Marie’s oldest daughter Riley Keough. Earlier this week, the It Comes at Night actress opened up about her family honoring her late grandfather’s memory. “We try to go to Elvis week in Memphis every year,” Riley, 28 told James Corden. “We didn’t get to go last year or the year before, but I think we’re going to try and make it this year." Describing the celebration, she said, “There’s so many things. There’s a whole candle lighting thing and there’s like all kinds of activities all week. It’s pretty cool.”