The Suits cast left their business attire at Pearson Spector Litt as they attended the ATX Festival panel in Austin, Texas on Sunday. Dressed casually, the crew, which included Meghan Markle, took the stage at the Paramount Theatre for a 90 minute table read and moderated Q&A. Prince Harry’s girlfriend, who has been keeping a relatively low profile since news broke of their relationship last summer, was front and center as she reminisced about the first season and shared laughs with her co-stars as they went over their lines. 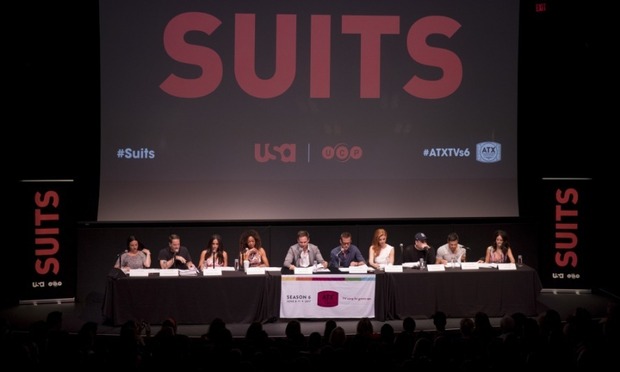 Meghan Markle and her Suits co-stars had a blast during their ATX Festival panel Photo: Rick Kern/USA Network

Meghan, who was most recently seen with her royal beau in London for Pippa Middleton's wedding, became excited as she read from the pilot script. “I think this was my audition scene,” she said. It was the scene when her character Rachel Zane tells Mike Ross she doesn’t test well and that’s why she isn’t a lawyer. Throughout the hour-and-a-half panel, there were sweet moments between the group, which also included: Gina Torres, Patrick J. Adams, Gabriel Macht, Sarah Rafferty and Rick Hoffman as well as Nick Wechsler and Abigail Spencer, who filled in for multiple characters in the pilot episode, on stage.

RELATED: ALL THE BEST PHOTOS FROM PIPPA'S WEDDING

Loads of jabs were thrown at each other, especially when the cast realized that Gabriel and Rick’s relationship in real life is very much like Harvey and Louis’. With that, the cast really showed their close bond and recalled coming to the Toronto set prior to season one. “We were in a group email the other day, and I was saying we had all lived in the same corporate housing so on top of working together, we were living together,” said Meghan, who wore a floral Club Monaco dress with red shoes. “We were a family right out of the gate.” 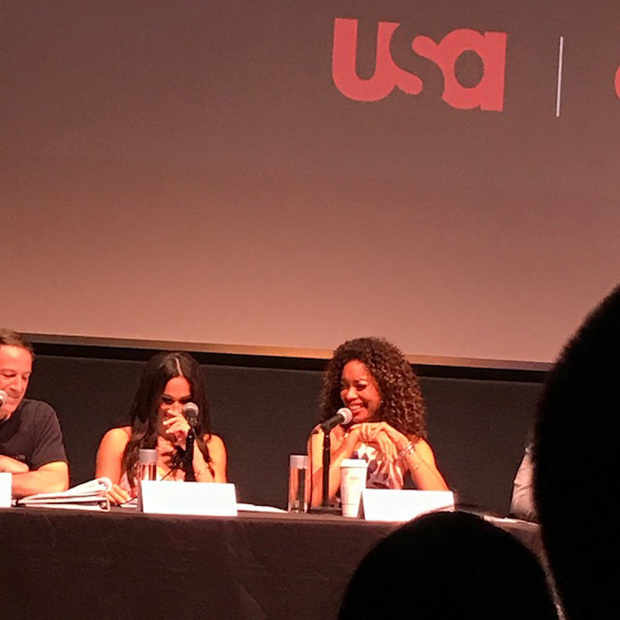 Gina, whose character Jessica Pearson left last season, added: “There was an instant level of comfort.” In fact, Patrick J. Adams told HELLO! on Saturday, “We are all a big family. We’ve been together for years and been through ups and downs.”

RELATED: Patrick J. Adams on life back on the 'Suits' set and if we can expect Prince Harry to make a cameo

The cast was also asked their favorite Rachel and Donna moment. “Michelle Ross and Harriet Spector, it was the best when they go to the bar and they take on these different personas,” the 35-year-old actress noted. “It’s great, all the scenes are good.” As for Sarah Rafferty, she loved when she had to tickle Meghan’s nose. “It cracked me up so I think we did it a few times,” she added as the British royal’s leading lady did the bewitched move for the audience. 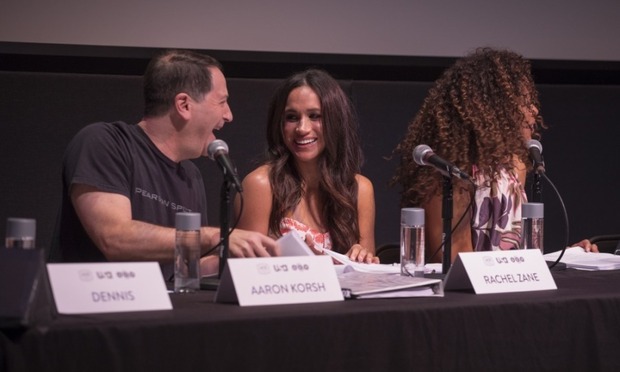 Patrick also mentioned his most challenging scene was a steamy encounter in the file room. “Sex in the file room was weird,” the actor, who will be directing the 100th episode that will air on August 30 shared. Meghan softly chimed in, adding: “Of course that was weird.”

As Suits gears up for the season seven premiere on July 12, Rachel Zane finally gets to be a lawyer. “She’s worked so hard, and I love that as a role model how she has been crafted,” the former Tig founder explained of her character’s growth. “She has really earned that spot.”