Meghan Markle celebrated a big milestone on Tuesday, July 11. Prince Harry’s girlfriend came together with her Suits co-stars in Toronto to celebrate the 100th episode of their hit USA Network show. The 35-year-old, who recently returned from London, looked chic for the rare appearance wearing a colorful pleated midi skirt, which she paired with a dark scoop-neck knit shell. 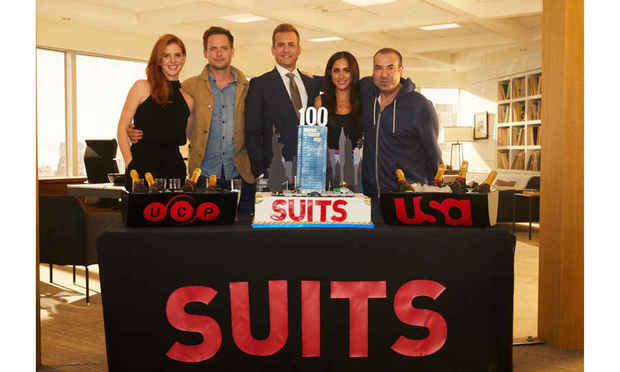 The actress, who plays Rachel Zane, was joined by her co-stars Patrick J. Adams, Gabriel Macht, Sarah Rafferty and Rick Hoffman for the celebration which included a Pearson Specter Litt-inspired cake by CakeStar and a Moët & Chandon champagne toast. Sarah previously opened up to HELLO! about getting together with her castmates admitting, “It’s so fun. It’s great." She added, “It’s like family time, right. Like a holiday.”

RELATED: Patrick J. Adams on life back on set

Last month, the Suits cast reunited in Texas for the ATX Television Festival where they participated in a table read of their show's pilot episode. Meghan made her return to the spotlight, discussing her character’s growth during a panel. “I’m so happy that, especially reading the pilot again, you can just see where she started,” she said. “To watch that progression, she’s worked so hard. I love that as a role model, how she’s been crafted to balance it all.”

The actress’s on-screen fiancé, Patrick J. Adams praised Prince Harry’s girlfriend's work ethic in June during an interview with HELLO!. “Meghan has been killing it this season," he said, while noting that her royal romance hasn't affected life on the set of Suits. "She comes to work and is super excited to be at work. It feels very normal.”