George Clooney and Amal have been continuing their romantic weekend in the city of love. On Friday, the human rights lawyer accompanied her husband to the Cesar Awards where he accepted an honorary career award. All eyes were on Amal as she showed off her growing baby bump in a strapless Versace gown. Inside, it was all ears as the 55-year-old raved about the mom-to-be. “To my wife Amal, there isn’t a day that goes by that I’m not proud to be your husband,” he said. “And I am excited about the years to come, and particularly the months to come. I love you very much.” 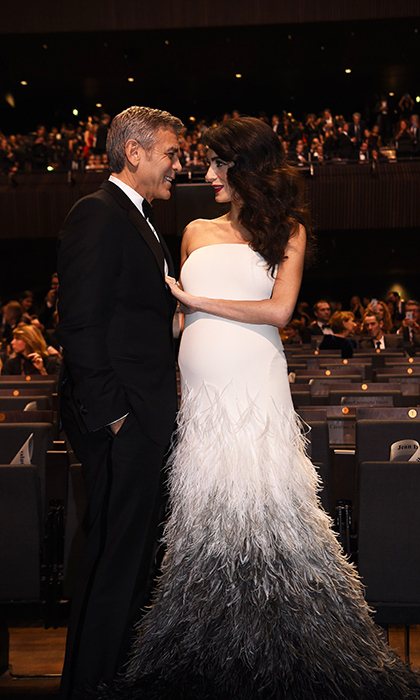 George and Amal at the Cesar Awards Photo: Getty Images

The 39-year-old added to his sentiment telling reporters on the carpet in French, “It is a great honor for us to be here. It’s the first time we’re in Paris together so it’s a bit of a romantic weekend for us.” After their evening out, the couple enjoyed all the city had to offer before they become parents of twins in a few months. Amal, who never disappoints with her style, stepped out with George in a back and white ensemble on Saturday. The soon-to-be mom rocked a chic dress and matching coat, while walking close to her husband. The pair even stopped to take a few selfies with fans on the street.

One stop in particular was for their babies. "George and Amal were shopping for children's furniture called Baudou,” an onlooker tells HELLO!. “They looked to be browsing with a sales associate." Once it was time for the evening, Amal changed into a lace dress with knee high boots for dinner with her leading man at Restaurant Lapérouse, a favorite of the Hail Caesar actor. “Amal is amazing,” Gregory Lentz, the owner of the restaurant told People. “They’re completely, fully in love. She is just lovely, just lovely.”

MORE: George Clooney on becoming a first-time father to twins

“He’s happier than I’ve ever seen him,” Gregory, who has known George since 2011, added. The couple dined in the Victor Hugo private room where the soon-to-be dad enjoyed champagne while his wife stayed clear of the bubbly. They then started with snails and George had langoustine while Amal had a green salad with no dressing. Both George and Amal had the house specialty steak Lapérouse and chose a cheese plate over dessert. 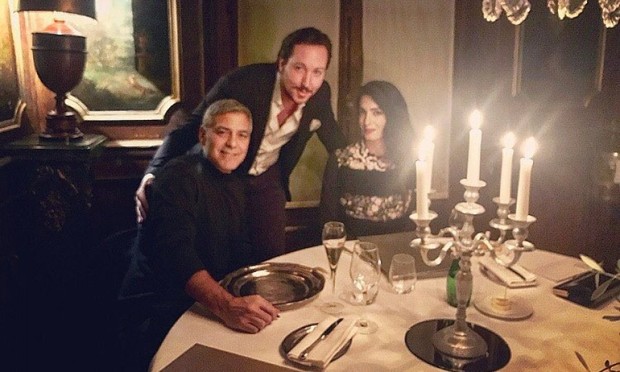 RELATED: Everything George Clooney and Amal's celebrity friends have said about their pregnancy news

Since news broke that the two are expecting twins, the world travelers, who even visit not-so-safe destinations, have scaled back the amount of places they will visit as they wait for the arrival of their kids. “We decided to be much more responsible, to avoid the danger,” George said to Paris Match. “I won’t go to South Sudan any more or the Congo, Amal will no longer go to Iraq and she’ll avoid places where she knows she isn’t welcome.”

The couple, who wed in Venice, Italy in 2014, are overjoyed that they will become first time parents. He continued, “Bringing a child into this world … even two! We are very happy, very excited, but also a bit nervous, it’s normal.” And to the Rencontres de Cinema, The Descendants star added, “It’s going to be an adventure. We’ve sort of embraced it all… with arms wide open.”