Nicole Kidman may have instantly had eyes for Keith Urban, but the country star initially played hard to get. "I remember thinking, I had such a crush on him and he wasn't interested in me," she told Ellen DeGeneres on Thursday's show as the host flashed the photo from their first encounter at the 2005 G'Day USA Gala. "The craziest thing is to have a photo of when you first meet." 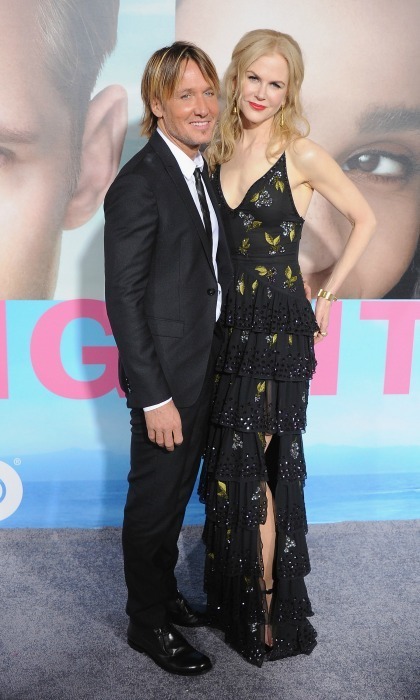 After a round of disbelief from the host and audience, the 49-year-old explained her point. "It's true. He didn't call me for four months." After 10 years of marriage, it's clear the couple, who stepped out earlier this week in support of Nicole's HBO mini series Big Little Lies, haven't let the past interfere with their future. "There are certain things, and I think anyone in a marriage would agree, that you just leave at that," she quipped when asked if she ever questioned her husband about what took so long to call. "We're here now and it's all good. We don't need to hash out all that stuff so I should just shut my mouth. I think he was shy." Once the two started dating, it didn't take them long to tie the knot as they wed in an intimate ceremony in the summer of 2006. The Lion star and her country crooner are also parents to Sunday, eight, and Faith, four. Though they are often inseparable and constants on the carpet for each other, this weekend Keith may have another date to the Grammys as Nicole will be attending the British Academy Film Awards in London. "Then Sunday, who is our daughter was like, 'I'll go with dad to the Grammys,'" she said. "And I'm like 'oh no, no, no,' because she's eight, and they use inappropriate language, Ellen."

WATCH NICOLE TALK ABOUT KEITH PLAYING HARD TO GET