In an incredibly relatable moment, Drew Barrymore opened up about the “mayhem” she experienced when taking her daughters, Frankie, two-years-old, and Olive, four-years-old, to visit Disney. The 41-year-old star laughed during her appearance on Late Night with Seth Meyers as she recalled her family's trips to both Disneyland and Disney World. While the two adventures were glossed with your typical dose of Disney magic, Drew revealed how things took a hilarious turn both times when her daughter Olive had a meltdown.


Overall, the Santa Clarita Diet actress was overjoyed to be taking her children to the “most magical place on earth.” “I just had tears of joy seeing their joy,” she told Seth Meyers. However, as most parents probably know, after a long day of walking around Disney there comes a moment where the magic dissipates and the drama bubbles up. “If you’ve ever taken your kids to Disneyland or Disney World, it all ends at some point in, like… mayhem,” Drew said smiling.

GALLERY: Celebrities and their children who love Disneyland

Upon that, Seth held up a photo of Olive and her mom in Tomorrowland at Walt Disney World. “This seems to be a moment where you caught the mayhem,” the host said of the photo, which showed Olive laying on the ground in tears, wearing some kind of princess dress, while Drew stood beside her. “That is a legitimate picture of my daughter just losing it on the floor,” Drew said, eliciting laughter from the studio audience. “In this case, she wanted to chase a duck or like an egret… some interesting bird.”

MORE: Drew Barrymore opens up about daughter Olive developing her own style

The actress, who shares parenting duties with her ex-husband Will Kopelman, continued to discuss the photo, saying: “In hindsight, as a parent, you have these revelations like, ‘I should’ve let her catch it… cause she either would have and been satisfied, or she wouldn’t have been and been mad at the duck and not her mom who tried to stop her from chasing the bird. I say just let ’em chase it and see what happens.” 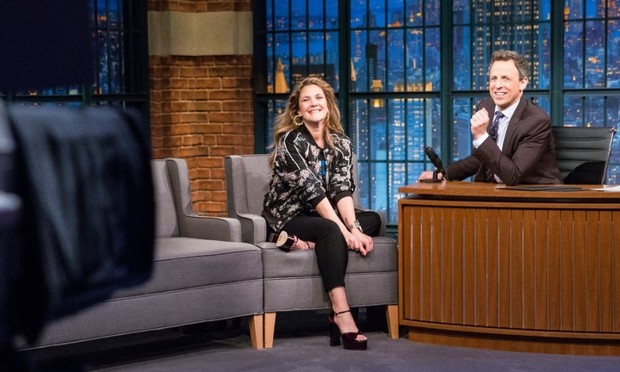 Next, Seth brought out a similar picture, which displayed Olive laying on the ground again, but this time in California’s Disneyland. Matter-of-factly, Drew said, “This is her losing it at Disneyland - because it all ends up there [in mayhem]. You push it hard enough because you’re like, ‘I’m here, let’s skip the nap and let’s go, go, go.’ You wanna maximize it… this is how it always ends for me.”

The late night host, who has a 10-month old of his own, then asked Drew if she gets any warning before the tantrums erupt. “They come at the most interesting times… you cannot predict!” she said, speaking candidly. “I think you should have like ten consistent tools in your arsenal.” The star went on to discuss how parents can combat their children’s outbursts with different approaches: “either the tender loving approach or the ‘I’m very serious’ approach.” “I like your approach,” Seth jokingly responded, “which is a photo op.” Overall, Drew loved going to Disney with her children, saying that it was “the best experience ever.” The actress even shared a selfie with Cinderella to her Instagram, thanking Disney for the magical time. Along with the photo she wrote the caption: Yes! This happened. Thank you Walt Disney World for making dreams come true. My daughters were on a cloud. A big puffy princess cloud.”