Hollywood icon Debbie Reynolds has broken her silence following her daughter Carrie Fisher's death. The Singin' in the Rain star took to Facebook to pen a message thanking everyone for their support of the late Star Wars actress.

"Thank you to everyone who has embraced the gifts and talents of my beloved and amazing daughter," Debbie wrote. "I am grateful for your thoughts and prayers that are now guiding her to her next stop. Love Carries Mother." 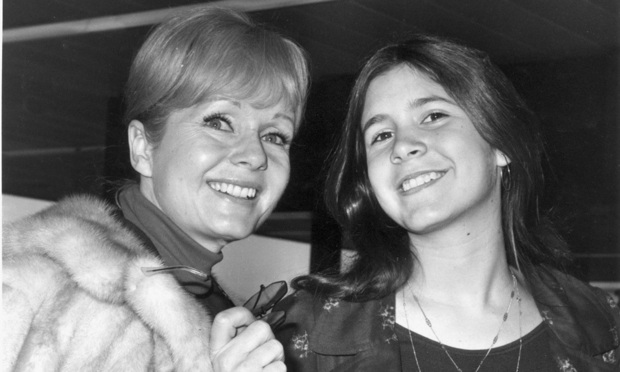 Carrie died on Tuesday, December 27, days after suffering a heart attack on board a flight from London to Los Angeles. A spokesperson for the actress' family confirmed the sad news to HELLO! in a statement on behalf of Carrie's only child, daughter Billie Lourd.

“It is with a very deep sadness that Billie Lourd confirms that her beloved mother Carrie Fisher passed away at 8:55 this morning,” the statement read. “She was loved by the world and she will be missed profoundly. Our entire family thanks you for your thoughts and prayers.”


Since news of the Princess Leia star's passing broke, Carrie's Star Wars co-stars expressed their sadness. In a statement to E! News Harrison Ford said, "Carrie was one-of-a-kind…brilliant, original. Funny and emotionally fearless. She lived her life, bravely." The actor added that his thoughts are with Carrie's family and "her many friends. We will all miss her."

Likewise, the pair's fellow co-star Mark Hamill took to Twitter to mourn his friend's death. The Luke Skywalker actor shared a black and white photo of himself dressed in character alongside his on-screen sister Carrie. Attached to the vintage photo Mark tweeted, "no words #Devastated."

A number of other celebrities have taken to social media to pen tributes for the late Hollywood star.

Just over a week ago, our friend Clelia took this photo of David and Carrie Fisher at a dinner in London. She asked me if she could put her hands on my "beautiful baby belly". Fuck yes you can, I said. This damn year and its cruel heart.

My mother's heart goes out to this exquisitely talented young woman. Her mother's spirit and talent lives on in her and I'm sure all of Carrie's fans and friends will give her space and privacy.

God bless @carriefisherofficial This woman and her friendship will be deeply missed.

Thank you Ms. Fisher, for opening up a world of possibilities, strength and hope for all little girls. Rest. pic.twitter.com/LTpZsGeCR8

Sweet, Brilliant, Irreverent, Huge hearted Carrie, You gave me advice I live by to this day, & always will. On the wings of angels fly...❤️

Oh no we lost Carrie Fisher too. She was so funny and full of life. Rip. Condolences to her family and friends. We'll miss her too.

I'm sitting in stunned silence learning of the death of #CarrieFisher. In what has been a particularly sad year this may be the hardest. RIP

Carrie Fisher "Ugh,will everybody stop all of this?"
Us "no, let us gush, you just have to take it"

Carrie Fisher has passed, she was funnier&smarter than anyone had the right to be. Sail On Silver Girl. Condolences Debbie & Billie
R.I.P.

I can honestly say that Carrie was one of the best and closest friends I've ever had in my life. She was the smartest, funniest, kindest, and most generous person I have ever known. My heart is completely and permanently broken. This is the kind of loss that you never recover from. I know because I still miss my dad every single day. Carrie, I love you so much. I can't imagine living my life without you there to fix it. You meant more to me than just friend or family, I feel that you were part of me, and you always will be. I can never thank you enough for all those magical evenings. Thank you Debbie and Billie for sharing your prodigal princess with me. My thoughts are with you now and forever. R.I.P. Carrie Fisher.