Donald Trump's daughter Ivanka hit the road early on November 7 for a busy day on the campaign trail. Prior to traveling to the various battleground states of Michigan, Virginia and New Hampshire, the businesswoman was gifted "reading’ material" courtesy of her five-year-old daughter Arabella Kushner – whom she would later take to the polls with her on Election Day, November 8. 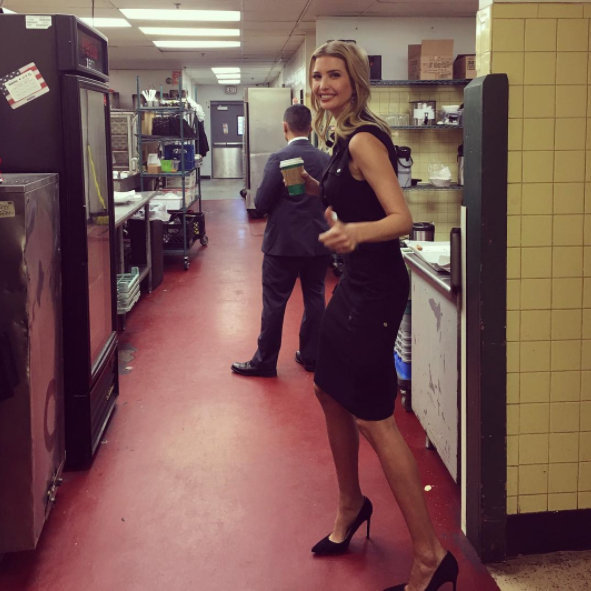 Ivanka shared this 'on the run' candid in Pennsylvania Photo: Instagram/@ivankatrump

The mom-of-three was joined by her younger sister Tiffany Trump as they set out for a day of campaigning on behalf of their dad. However, it wasn’t all work and no play. Before attending rallies and roundtable discussions with local businesswomen on the campaign trail, the GOP candidate’s daughters posted a Snapchat-filtered photo of themselves as puppies captioned, “Sistas!” 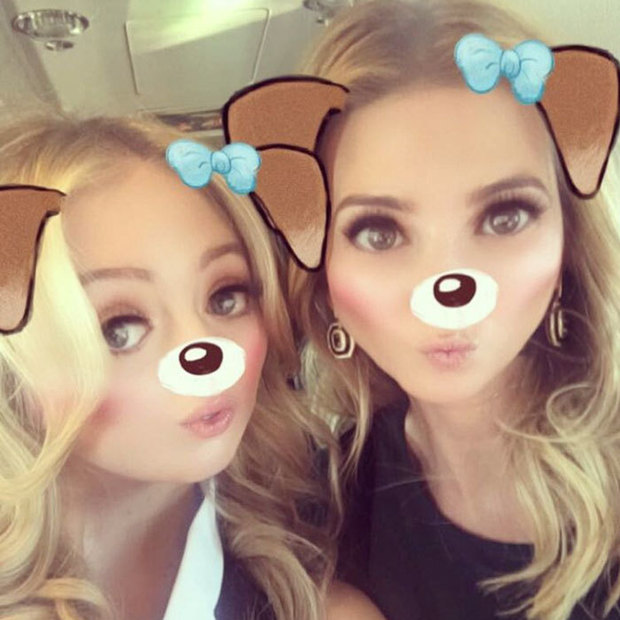 The eventful day culminated with a rally held at Manchester, New Hampshire’s SNHU Arena. The Trump family was out in full force for the final campaign event. In addition to Donald's daughters and Ivanka’s husband Jared Kushner, the Republican presidential candidate was joined on stage by his son Donald Jr. and his wife Vanessa, along with son Eric and his spouse Lara Yunaska. Donald’s wife Melania and their young son Barron were noticeably absent from the festivities.

A LOOK AT IVANKA TRUMP AND JARED KUSHNER'S CUTEST PHOTOS 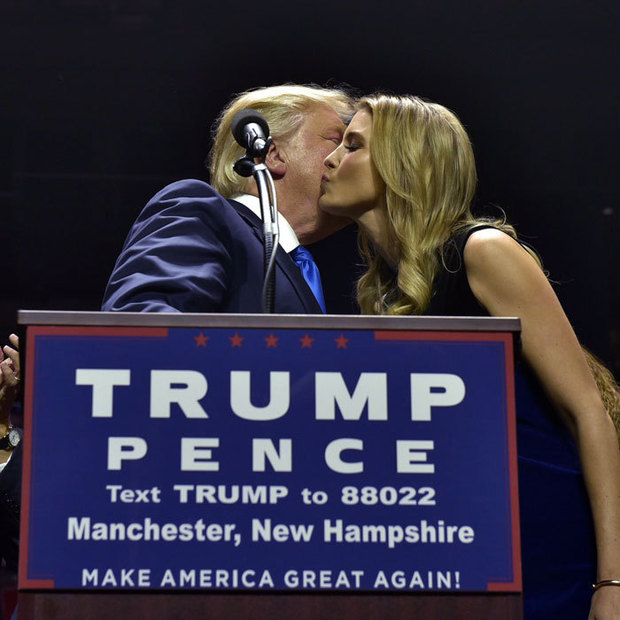 Ivanka, who gave an unexpected speech in praise of her father, planted a kiss on her dad in New Hampshire Photo: MANDEL NGAN/AFP/Getty Images

Meanwhile, Chelsea, who recently told E! News that her friendship with Ivanka "started before politics, so it will last beyond politics," joined her mother Hillary Clinton on Monday as they made their rounds for the final day of campaigning. 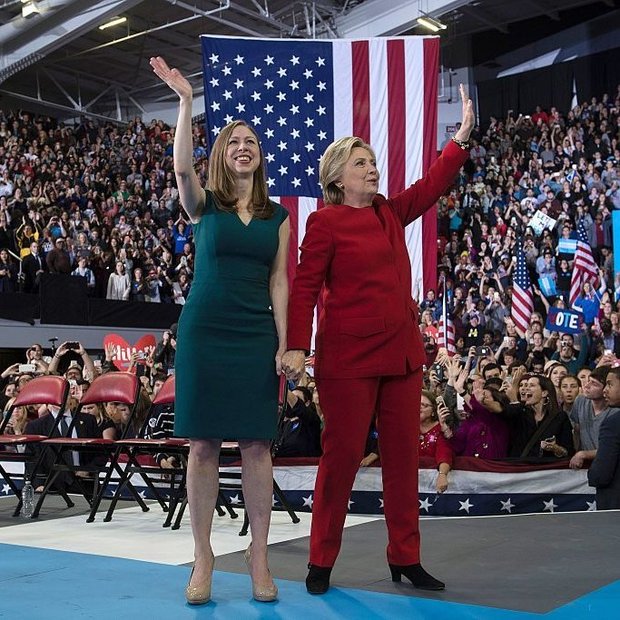 The Democratic candidate’s daughter took to her Twitter to express her excitement, writing, “It’s the final day on the campaign trail and I couldn’t be more thrilled to start the day w @HillaryforMI & @POTUS! #MISheCan.” 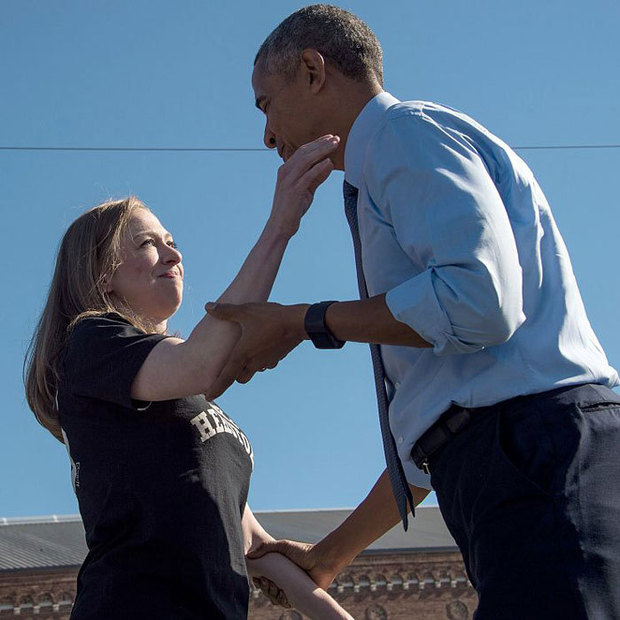 Bill and Hillary's only child began her day campaigning with President Barack Obama and introducing the famous dad-of-two at a rally in Ann Arbor, Michigan. Tweeting about the event, she said, "Honored to introduce you today Mr. President! Very proud my kids were born while you were in office."

On Twitter, Chelsea also gave fans and followers at glimpse at her politician mother behind the scenes, revealing that her own daughter, Charlotte, whom she shares with husband Marc Mezvinsky, was happy to see her grandmother via FaceTime. The mom-of-two wrote, “So happy Charlotte got to see Granma today! She loves the Byron Barton books, particularly Planes & My Car.” 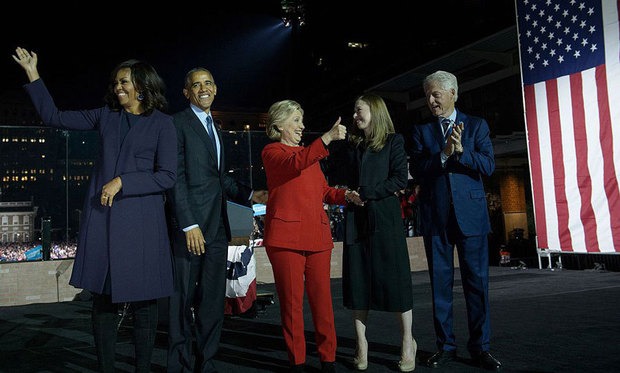 In the evening, the Clinton women along with former President Bill Clinton were joined by First Lady Michelle Obama and President Barack Obama for an election eve rally in Philadelphia, where musician Bruce Springsteen serenaded the massive crowds with his guitar.

Following the event held at Independence Hall, Chelsea and her mother attended a midnight rally in Raleigh, North Carolina. The pair was joined by musicians Bon Jovi and Lady Gaga for the presidential candidate's final campaign event.