Marriage isn't for everyone, and according to Goldie Hawn, that certainly rings true for her and her longtime love of 33 years, Kurt Russell. The 70-year-old actress shared the key to their relationship, noting that if in the past they decided to tie the knot, they would be "long divorced by now." 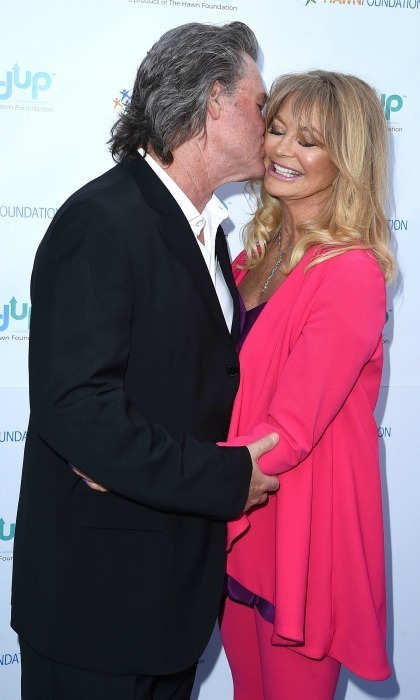 Goldie Hawn says she and Kurt Russell would be long divorced if they ever go married Photo: Steve Granitz/WireImage

“Marriage is an interesting sociological thing. If you need to be bound to someone, then it’s important to be married,” Goldie said during her appearance on Monday's episode of the UK’s ITV Loose Women. “If you have independence, if you have enough money and enough sense of independence and you like your independence, there is something psychological about not being married because it gives you the freedom to make decisions.”

She continued: “In a healthy, longer-term relationship, I would say it's great to be together about 68% of the time."

Goldie and Kurt have been together for 33 years Photo: Steve Granitz/WireImage

Goldie and Kurt, 65, met in 1968 while filming, The One and Only, Genuine, Original Family Band. The pair became coupled up during 1984's Swing Shift, and have been together ever since, even starring together in 1987s Overboard. The duo are parents to son Wyatt Russell, and Goldie's two children actors, Kate, and Oliver Hudson, from her second marriage to Bill Hudson.

Although marriage isn't in the stars for Goldie, last week the First Wives Club actress revealed that she only has eyes for her man. "Well well ain't you good lookin!!!," she captioned the photo Kurt's GQ magazine cover, star on her Instagram.

Inside the magazine, Kurt opened up about the blonde beauty. "What's great about Goldie, she's a very immediate person," the Deepwater Horizon star said inside the magazine's October issue. "And I'm pretty immediate too. I'm pretty 'right now this is what's happening'. I'm all excited about going to Honolulu, because I haven't seen her in a little while. Still have that thing of: She's going to be at work, I'll go to the hotel, I'll know when she's coming home, and I'll try to look good. It'll matter to me. And I'll be excited to see her."