Even though it was his dad Michael Phelps who brought home the gold at the Olympics, his son, baby Boomer Phelps, also one a pretty awesome prize: an adorable kiss from his proud dad. After Michael, 31, secured his 20th gold medal and 24th overall in the Men's 200m Butterfly on Tuesday evening in Rio, the champion swimmer made his way to the cheering section to share his excitement with his little boy.

The Olympic champion was greeted with kisses from his fiancé Nicole Johnson, 31, before she held their son over the railing so he could show his dad some love. Michael's mother Deborah Phelps, also shared a moment with her son, hugging him close and crying tears of joy. 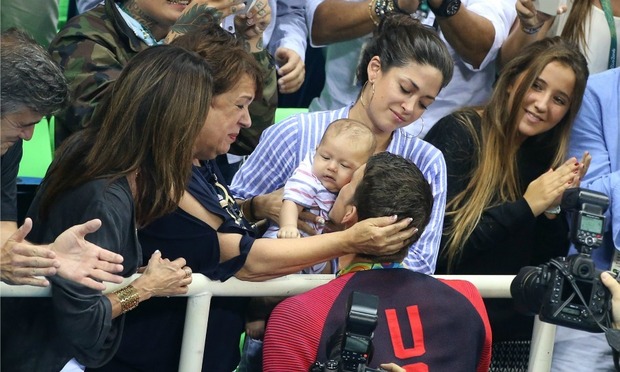 Baby Boomer, who made his debut in May, has stolen the hearts of Olympic fans around the world since making his debut in the stands during his dad's pre-Olympic trials. The adorable 3-month old has been seen supporting his father in patriotic "MP" gear and catching a few naps during races.

Before his father's jam-packed night in the pool, a photo of Boomer waking up and ready to cheer the Maryland native on was posted on his Instagram account.

"Time to wake up!!! Daddy is racing soon," read the caption alongside a pic of the littlest Phelps letting out a big yawn in his mommy's arms. 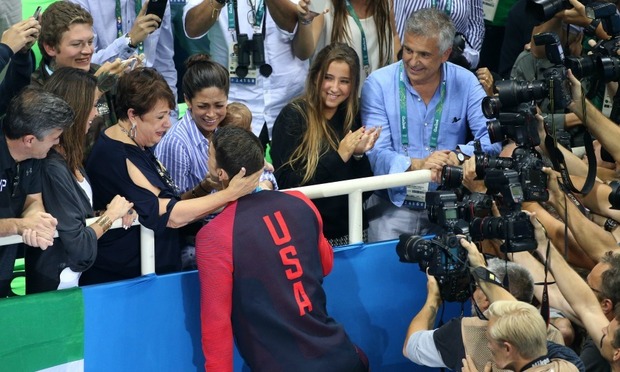 Michael's mom and fiancé were in the stands to cheer him on Photo: Getty Images

Boomer and the rest of the Phelps clan didn't have to wait much longer before they celebrated once more. Seventy minutes after receiving the gold for Team USA in his signature event, Michael anchored fellow Team USA swimmers Ryan Lochte, Conor Dwyer and Townley Haas, to the gold during the Men's 4x200m Freestyle.

While his father is on a winning streak, Boomer continues to also win hearts across the world. On Sunday night, all eyes were on the tot, who wore a red, white and blue onesie and adorable noise-canceling headphones when his father brought home gold medal number 19. 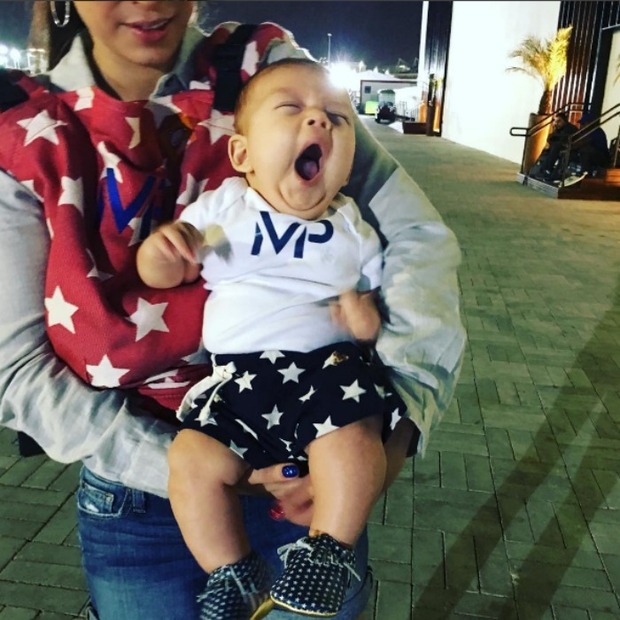 Boomer has been stealing the show in his patriotic "MP" gear Photo: Instagram/@boomerrphelps

ALL THE BEHIND-THE-SCENES MOMENTS FROM THE 2016 OLYMPICS

According to Michael, there is more "MP" fashion coming from Boomer for the remainder of the Olympic games. “He's going to have some cool outfits on, that's for sure. You've got to check him out,” the history-making Olympian said during an interview with US Weekly. “I've gotten some photos of him — Boomer will be dressed to impress in the stands, that's for sure."