Gigi Hadid made her 21st birthday one for the books! The Sports Illustrated model officially celebrated her milestone birthday on Saturday and took the party into the rest of the weekend. 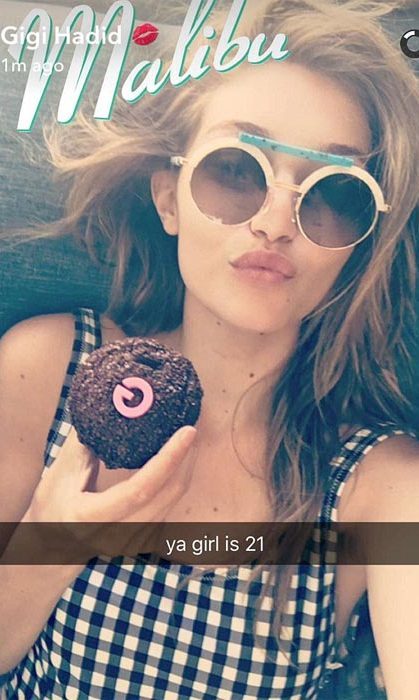 Gigi's celebration started on Friday with her father Mohamed Hadid and siblings. On her actual birthday, she then spent some quality time on the beach in Malibu with her mother Yolanda Hadid and her boyfriend Zayn Malik. The supermodel's boyfriend snapped a picture of him, Gigi and her younger sister Bella climbing rocks during their beach getaway in Malibu. The Pillowtalk singer's mother and sisters also helped Gigi ring in her big day. Yolanda shared a sweet pic from the beach dedicated to her oldest daughter's special day.

"Celebrating Gigi Day @bellahadid #Sisterhood #PointDume," she captioned the picture of Bella, 19, posing in a black bathing suit with her sister's name on it. Yolanda also shared a picture of Gigi making guacamole, which according to her is "the best in town."

The fun didn't stop there. Gigi spent some quality time with BFF Taylor Swift and her boyfriend Calvin Harris during the second weekend of the Coachella music festival. Gigi took to her Snapchat to share some of the fun private jet moments she Calvin and Taylor shared.

"I love you," she captioned the picture of the Blank Space singer holding up a Sweet Lady Jane Triple Berry cake that read "Happy 21st Birthday Gigi."

On Saturday, Taylor wrote on her Instagram a special message to her best friend in honor of her big day.

"This beautiful, intelligent, thoughtful, hilarious person turned 21 today!!! I love you @gigihadid," she captioned the picture of the birthday girl smiling big as she cuddled on the couch with her friend's cat.