When it came time for Sacha Baron Cohen to screen a scene from his new film The Brothers Grimsby, he wanted the reaction of an "average American family,” so he turned to the Kardashians. The funny man stopped by Conan on Wednesday where he discussed his private screening with the reality star bunch.

"I know Courteney Cox,” he told host Conan O’Brien. "I said to her, 'listen … I'm an English guy and I want to get the reaction of an average American family.” The actor continued, "So she brought the Kardashians over to my house – with Kanye West." 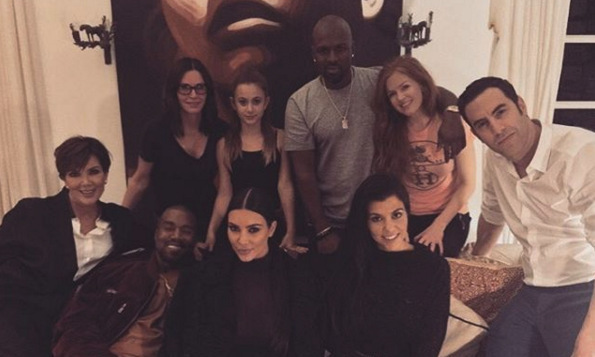 Sasha screened the upcoming comedy film for the family’s matriarch Kris Jenner, Kim Kardashian, Kanye, Kourtney Kardashian and Corey Gamble on Monday evening. Thankfully the 44-year-old showed the family’s reaction for viewers. Seated on the couch, the reality stars looked amused as they watched a scene from the movie unfold. Corey can be heard saying, "Oh my god! Man, that is classic. "

"Who even thinks of this?” Kris asked in the clip, as her boyfriend replied, “Sacha!”

Kim took to her Instagram to share a clip of the group’s reaction the film, noting the full video is available on her app. She wrote, "You guys are gonna die!!!!! You have to go see this movie!!!”

Kanye certainly looked entertained by the movie as he shielded his eyes, laughing at the end. The screening was a nice Twitter break for the rapper, who has been engaging in Twitter rants and feuds.


Surprisingly Kourtney admitted on Wednesday to her millions of Twitter followers that she loves The Life of Pablo artist's outlandish tweets. She tweeted, "I want everyone to know how much I live for @kanyewest 's tweets.”

The mom-of-three’s tweet echoes her sister Kim’s thoughts on Kanye's Twitter sprees. On her website Kim wrote, "LOVING My Husband. HATING That people don’t get that Kanye will stand up against the whole world for his creativity and art.

"WANTING Everyone to be as honest as Kanye,” she added, "WATCHING Kanye shoot his new video. READING Kanye's tweets."

WATCH SACHA EXPLAIN THE SCREENING BELOW