Kim uploaded a picture of the gang on to her Instagram page for her 62 million followers. “About last night,” wrote the mom-of-two. “This was the moment right before Sacha showed us the CRAZIEST scene from 'The Brothers Grimsby.' We laughed so hard we cried!” 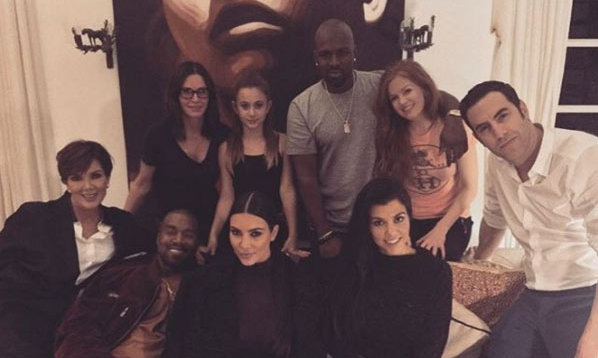 The famous group of friends enjoyed a movie night together Photo: Instagram/@kimkardashian

The 35-year-old also tweeted about her excitement to see new film and informed fans they too could see a sneak peek of the movie on her app. “About to live stream on my app! Sacha Baron Cohen is about to show us a crazy clip from his new movie 'The Brothers Grimsby.' Despite the effort, she then tweeted that his wifi wasn't working and the preview would come at a later time.

At the back of the photo, Courteney's daughter Coco was also in the mix among the many famous faces. The only child of the Friends actress and ex-husband David Arquette, who isn't often photographed, looked very grown up in a black tank top with her hair half-up, half-down.

Kim's cozy night in with her husband and friends comes a day after the star revealed what she and Kanye did on their first date. The reality TV star uploaded a video of her and Kanye playing the tune "Heart and Soul" on a large floor piano at the famed, but no longer in existance, FAO Schwartz in New York City.

Our 1st date. #HeartAndSoul For the full video go to my app!

The two started dating in April 2012 following Kim's divorce from her second husband Kris Humphries. The couple turned their friendship into romance and went on to get married and have two children together – North, 2, and Saint, 3 months.

During an interview with Access Hollywood, Kim spoke about how their romance blossomed. “I was always attracted to him. When I first met him, we worked on a project together and there was definitely a spark, but we were in other relationships and we kept our distance, and that was that.”