Who else can say they gave one of the hottest stars on the planet a lap dance? Rebel Wilson appears on the Ellen DeGeneres Show on Friday, and talks about the backlash she received after her extra-friendly encounter with Harry Styles. 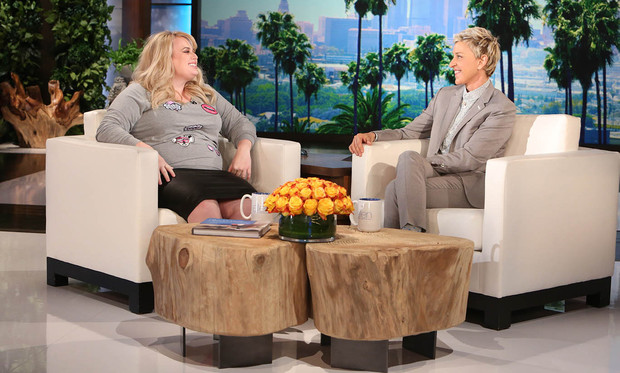 "Well as you know, I’m a big One Direction fan," Rebel explained about the moment she gave the 22-year-old pop star a lap dance during her last visit to the show. "Basically, I got accused of sexually assaulting Harry Styles."

She continued: "Yeah, these little girls, I think they’re about 12. Very, very unhappy with that. Basically, we’re just two professional entertainers having a good time. And he really enjoyed it and I told him that on Twitter and they just sent me more death threats."

The How to be Single star shared that she didn't let the mean tweets from the Directioners get her down, in fact, she hope that they can live the moment through her.

"Yeah yeah, they get very, like, they love them and they think they’re gonna be with them," she quipped. "And I’m like, well, you guys are never like, with them, so."

Morning! I'm on ELLEN today talking HOW TO BE SiNGLE and rocking my awesome REBEL FOR TORRID spring collection that's ALMOST SOLD OUT on www.torrid.com X can't believe it! What a day!!

Although she got extra close to Harry, she claims that there was no further "direction" after their encounter. However, Rebel did admit that she recently shared a moment with another big name in pop music.

"I did pick up Justin Bieber the other night," she said. "Yep, in Las Vegas, Justin and I had a moment. We’ll leave it at that. I’ll talk to you later and I don’t want his fans sending me death threats."

The funny lady had the chance to play a fun game of "Would you Rather" on the show, choosing between some of Hollywood's most eligible bachelors. Rebel was all dressed and ready to go for her appearance, sporting a outfit from her spring collection available at Torrid in a pre-show photo posted on her Instagram.

"Morning! I'm on ELLEN today talking HOW TO BE SINGLE and rocking my awesome REBEL FOR TORRID spring collection that's almost SOLD OUT can't believe it. What a day!"

CLICK BELOW TO WATCH REBEL TALK ABOUT HER MOMENT WITH HARRY