Pope Francis made history as he joined President Barack Obama and First Lady Michelle Obama at the White House on Wednesday, September 22, and Eva Longoria was among the 11,000 cheering guests gathered on the South Lawn to witness it. 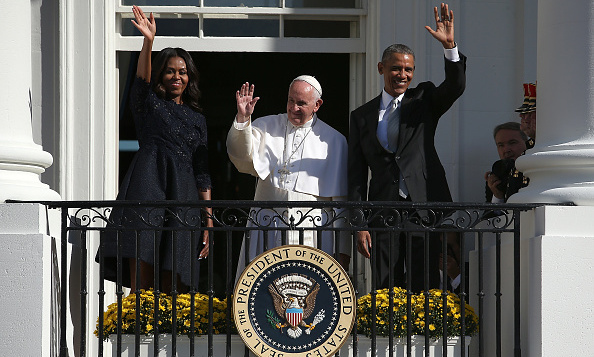 The former Desperate Housewives actress posted a series of pics on Instagram documenting the exciting occasion. Two of the pics showed her and her sister Liza, who was clutching a rosary. "A yr ago I asked my sister Liza 'who do you most want to meet in the world?' " she wrote. "She said 'the Pope'. And here we are!"

A yr ago I asked my sister Liza "who do you most want to meet in the world?" She said "the Pope". And here we are! #PopeFrancis #Blessed #DC

After meeting with President Obama in the Oval Office and appearing on the White House balcony with the president and Michelle, who wore a black Monique Lhuillier dress, the Pope gave a speech that touched on the issues of immigration and climate change, saying that the latter is a problem that "can no longer be left to a future generation."

He also addressed the ongoing debate about gay marriage, saying that American Catholics are committed to building "a society which is truly tolerant and inclusive, to safeguarding the rights of individuals and communities, and to rejecting every form of unjust discrimination," while respecting the right to religious liberty. 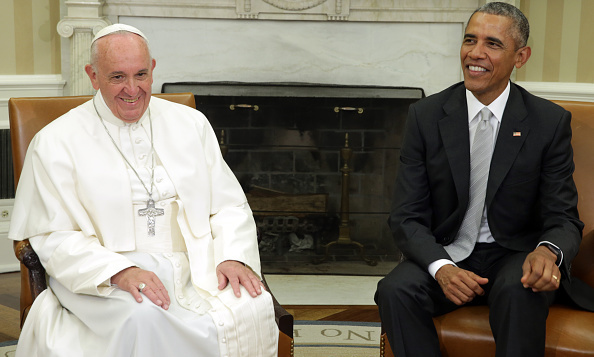 Maria Shriver was also at the White House (covering the Pope's visit alongside Matt Lauer for NBC), as was her cousin, Robert Kennedy Jr. and his wife, Cheryl Hines. Both of the Kennedy cousins brought their children.

After his speech the Pope — who has been traveling around Washington DC in a black Fiat since his arrival on Tuesday — climbed into a Jeep Wrangler Popemobile, complete with a glass-enclosed roof, where he greeted cheering crowds before heading to the Cathedral of St. Matthew the Apostle, where he addressed a gathering of 300 American bishops. 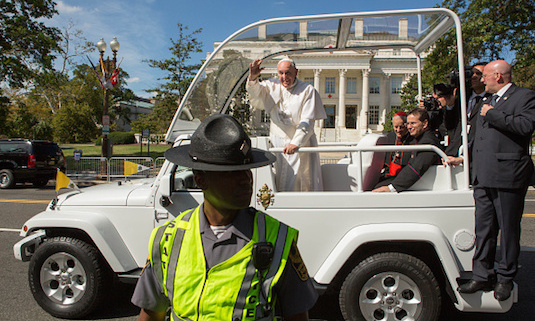 The Pope in the Popemobile Photo: Getty Images

"I have not come to judge you or to lecture you," he told them, before stressing the importance of attending to the needs of immigrants and the poor.

We all applaud @Pontifex's stance on #climatechange with Argentina's US ambassador Cecilia Nahon & Kennedy cousins pic.twitter.com/ZQvJjIjisr

The Pope is in the U.S. for a six-day trip that will also incorporate visits to New York City and Philadelphia.