Hollywood award ceremonies are usually adult affairs. Not so on Thursday night at the Nickelodeon Kids’ Choice Sports Awards, where the red carpet – or better said, orange carpet! – was filled with stylish little ones and their grown-up counterparts.

Former New York Yankee and heartthrob Derek Jeter, who would later get covered in gold slime while accepting an award, brought his adorable nephew Jalen Jeter-Martin along. The little boy showed some truly dapper style in his New York T-shirt, cream blazer and some very cool shades.

CLICK ON PHOTO FOR A FULL GALLERY OF KID FASHION 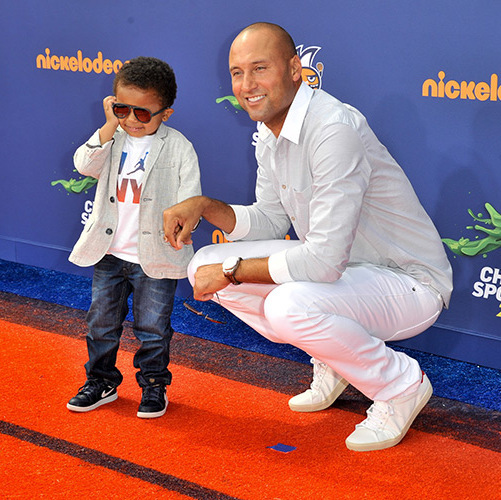 Derek Jeter brought along his nephew Jalen to the awards Photo: Getty Images

He wasn’t the only little one to steal the show. Ciara’s little boy Future Zahir, sporting black converse sneakers, looked fascinated by the cameras as paparazzi shouted at him to smile on the orange carpet. Ciara’s boyfriend, NFL player Russell Wilson, hosted the show, though that didn’t stop him from getting doused with green slime. 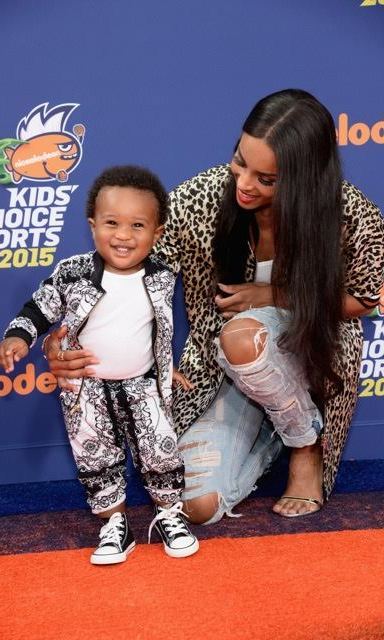 NBA player Stephen Curry brought along his little girl Riley along for the show. The 2-year-old – wearing a pink t-shirt, white shorts, with her hair in a bun – had hearts melting when she tagged along with her dad on stage. The proud dad received three awards for Best Male Athlete, Clutch Player of the Year and Sickest Moves, but he looked just as content watching the ceremony with his little one on his lap. 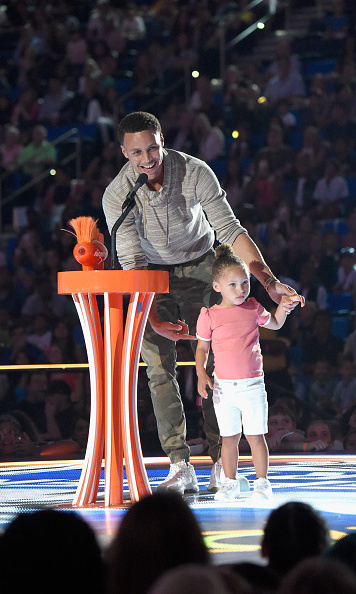 The cast of popular show Talia in the Kitchen looked super stylish, with actress Ellis Ann Jackson, who plays Valerie, rocking a leather-looking shirt and printed skirt. Nickelodeon actor Coy Stewart, who stars in the show Bella and the Bulldogs, let everyone know his favourite baseball team when he showed up in a Boston baseball shirt. 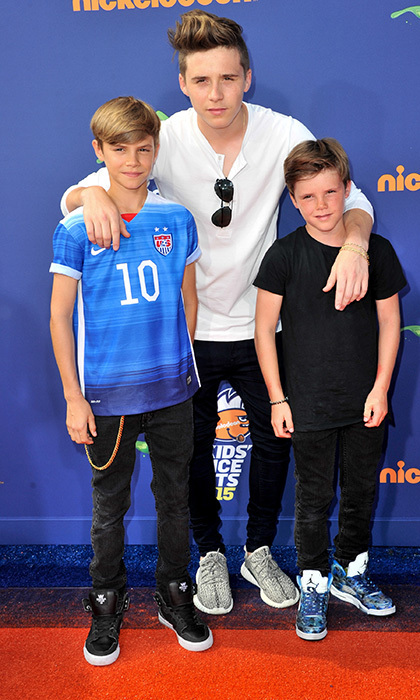 Brooklyn Beckham, the eldest son of soccer star David, and fashion designer and former Spice Girl Victoria Beckham, enjoyed a night out in LA, far from their London home. Brooklyn and his brothers, Romeo, 12, and Cruz, 10, got a chance to meet Hope Solo, with Brooklyn later posting a photo with the star goalie and recent World Cup winner on social media.

Brooklyn looked stylish and laidback in a white top, jeans and favourite Yeezy Adidas while Romeo and Cruz both stepped out in dark jeans and high tops.

Hope later shared a similar photo on her own Twitter account, telling fans: "With the handsome sons of @victoriabeckham and #DavidBeckham at the #KidsChoiceSports Awards!"

It is not the first time the Beckham boys have attended an event without either of their famous parents; the brothers also attended the Kids' Choice Awards together in March, while Brooklyn has also been to Coachella and Wireless festivals in the last few months.