Lena Tindall is growing up! Zara Phillips and Mike Tindall’s baby girl attended the Magic Millions Festival of Eventing at Gatcombe Park on Friday, August 2, with her royal relatives. The one-year-old, who was last seen in her stroller back in March, was spotted taking her first public steps at the festival with doting mom Zara Phillips following close behind. The royal tot looked adorable wearing a floral summer dress and pink barrette to keep her blonde locks out of her face.

While Lena has stepped out with her family before, Thursday's outing marks the first time royal fans have gotten a clear view of her sweet face, and to says she’s daddy’s little girl would be an understatement. Lena is the spitting image of her former rugby player father with her full lips and nose. The young British royal was seen flashing her baby teeth as she played in a bounce house.

MORE: How Queen Elizabeth is staying cool this summer 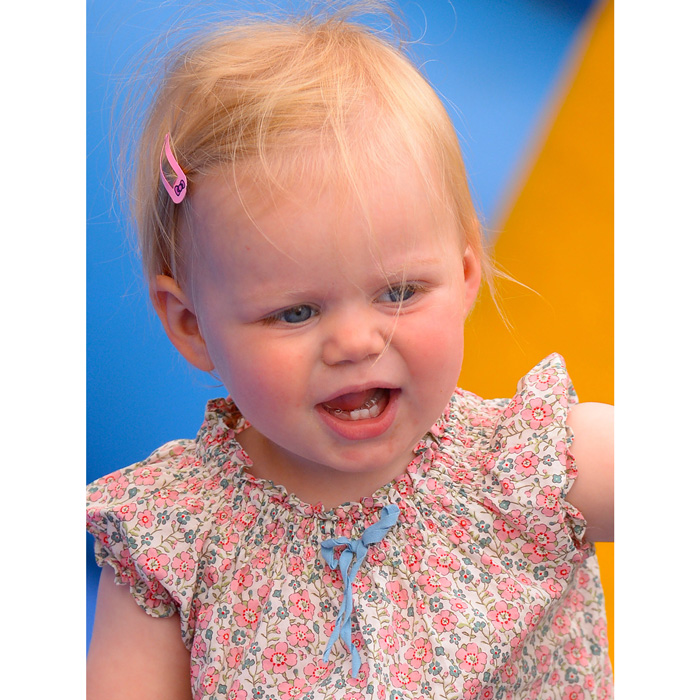 The Tindall family was joined by Zara's brother Peter Phillips, along with his wife Autumn, and their young daughters Savannah, eight, and Isla Phillips, seven, who twinned wearing denim overalls. The royal cousins have a close bond and are often seen playing together at public events.

Mike and Zara welcomed their second child, Lena, last June. News of her birth came a little over a year after the couple announced that they suffered a miscarriage. Zara previously opened up about the heartbreak of suffering two miscarriages in an emotional interview with BBC Breakfast’s Sally Nugent. "I think that's the hardest thing in our situation, is that everyone knew," Queen Elizabeth's granddaughter said, while fighting back tears. "And very much when things like that happen, normally it's just your family and friends, but unfortunately everyone knew about it."

Zara and Mike are parents to daughters Mia and Lena

"I have a very supportive family, Mike's incredible - and it's hard for the guys too," Zara noted. "It's very different for us because we're carrying the child, but for guys I guess it's kind of that helpless feeling, which must be incredibly high and horrible for them. At the end of the day they've still lost a child too."