Joining senior royals including Queen Elizabeth and Kate Middleton, Ivanka Trump attended her first foreign State Banquet on Monday evening at Buckingham Palace. The white tie event was thrown in honor of her father President Donald Trump visiting the United Kingdom. White House officials hadn’t confirmed whether any of the President’s children would be joining him on the three-day visit to Britain, but in the end Ivanka, Donald jr, Tiffany and Eric attended the lavish dinner. 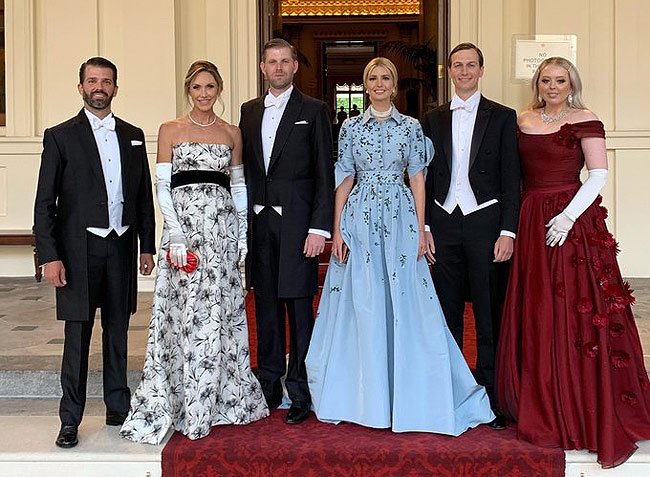 Ivanka, 37, wore a powder blue gown by Carolina Herrera for the banquet, during which she was sat next to the Countess of Wessex and the UK Secretary of State for International trade. Her husband Jared Kushner, meanwhile, was seated next to Princess Anne. Eric Trump was joined at the event by his wife Lara. Tiffany Trump paid homage to her hosts with a ruby red gown by British artisan Suzie Turner.

Donald Trump delivered a glowing tribute to his host ahead of their sit down dinner. He began by thanking the monarch for the "warm welcome" and "beautiful weather." "Your majesty, Melania and I are profoundly honored to be your guests for this historic state visit. Thank you for your warm welcome, for this beautiful weather, your gracious hospitality, and Your Majesty's nearly seven decades of treasured friendship with the United States of America," he said. 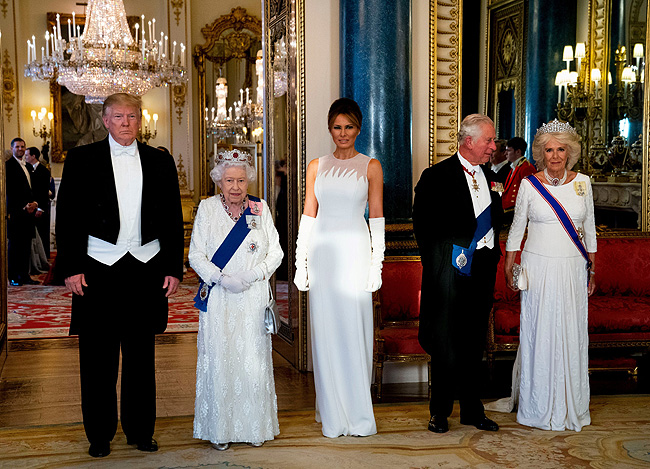 Following the glittering banquet, Ivanka shared images of her family at Buckingham Palace, tweeting: "Beyond wonderful to share this unforgettable evening with this crew."

RELATED: Prince Harry remains diplomatic as he steps out for event with the Trumps

Earlier in the day Ivanka met with the British monarch, Prince Charles and the Duchess of Cornwall and Prince Harry at an exhibit at Buckingham Palace. The group had a private lunch, before heading into the Royal Collection for a presentation of American items. Harry’s wife Meghan Markle was not in attendance. the Duchess is on maternity leave – after welcoming their son Archie Harrison on May 6.