We've seen portraits of such famed royals as Queen Elizabeth II, but now Meghan Markle's first unofficial "royal" portrait has been unveiled on the same day she celebrated her star-studded baby shower in New York City. At Wednesday night's BRIT Awards – aka the British Grammys – in London, Beyoncé and Jay-Z, also known collectively as The Carters, accepted the Best International Group award via video while standing in front of a stunning painting of the Duchess of Sussex. The Mona Lisa style portrait, created by illustrator Tim O'Brien, portrays Duchess Meghan in her most regal pose ever, wearing an 18th-century style gown, multiple pearl necklaces and, of course, a tiara! 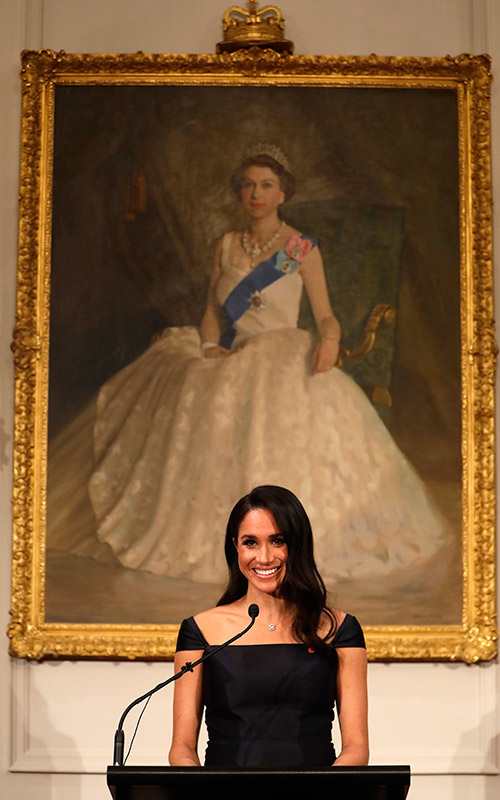 Meghan gave a speech in front of this regal portait of her grandmother-in-law Queen Elizabeth II – but now she has her own "royal" portrait, thanks to artist Tim O'Brien

Beyoncé and JAY-Z fans will recognize the duo's homage in front of the royal portrait of Meghan as a nod to the video for their song APES**T which features the couple standing in front of the famed Mona Lisa in the Lourve Museum in Paris. That said, Beyoncé made no reference to the Duchess in the BRITS acceptance speech, instead simply saying: "Thank you so much to the BRIT Awards for this incredible honor. You guys have always been so supportive. Everything is love. Thank you." 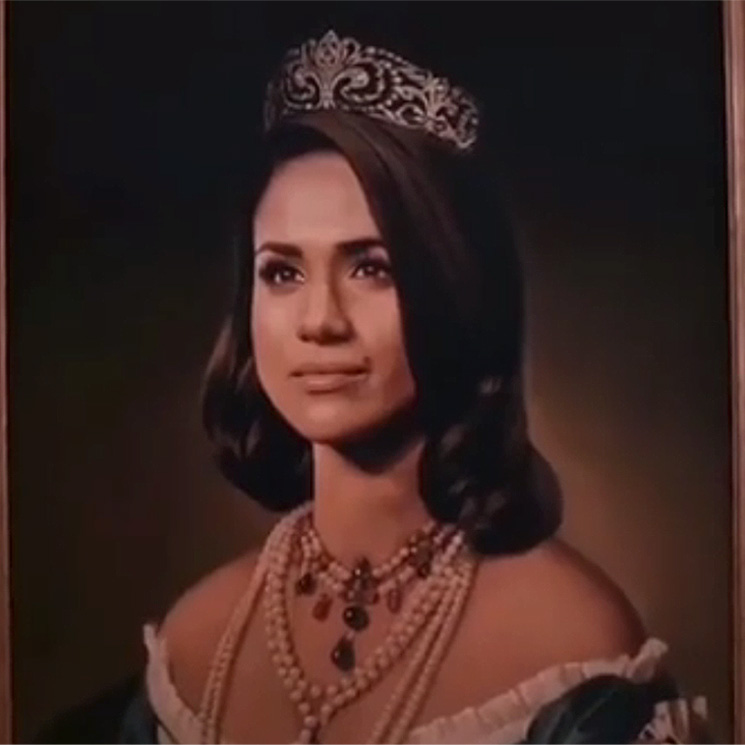 The painting made an appearance in Beyoncé and Jay-Z's acceptance speech at Wednesday's BRIT Awards in London. Here a close-up look at the portrait in the Instagram video

However, Beyoncé did later explain why she and Jay-Z featured in the BRITS video clip, congratulating her on the royal baby in the process.  "In honor of Black History Month, we bow down to one of our Melanated Monas," she wrote on Instagram of the biracial former actress. "Congrats on your pregnancy! We wish you so much joy.”

There were quite a few celebrities congratulating Meghan on Wednesday, as she celebrated her baby shower in the $75,000 penthouse at the Mark Hotel. Her famous guests included Amal Clooney – whose husband George Clooney recently came to Meghan's defense for her right to privacy – and Serena Williams, who also attended Meghan and Prince Harry's royal wedding in May 2018.