Prince William and Kate Middleton will step out for a very special date night. The Duke and Duchess of Cambridge will attend the BAFTA Awards on Sunday, February 10 at Royal Albert Hall. It wouldn’t be a royal appearance without a little bit of work. William, who is the President of BAFTA, is set to present one of the highest honors. The 37-year-old Prince will present the Fellowship Award. The award – which is the highest honor presented by the academy – recognizes the individual who has made an outstanding and executional contribution to film, television and games 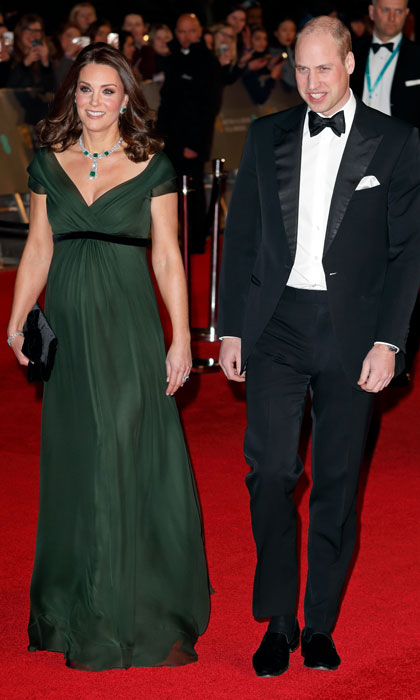 This year the award will be presented to Thelma Schoonmaker. The Duke and Duchess are no stranger to the ceremony. Kate and William dress to the nines and walk the carpet before heading inside of the show. In 2018, the 37-year-old Duchess stepped out in a stunning green Jenny Packham gown. The pregnant Duchess was all smiles and reportedly gave subtle nod to the Times Up movement with the black belt. George, Charlotte and Louis’ parents made their first appearance in 2011.

MORE: Kate Beckensale gets confused for Kate Middleton – find out how she owned it!

The royal couple also stepped out in 2017. For the occasion, the Duchess, who was a mother-of-two at the time, stunned in a gown by Alexander McQueen. The Duke and Duchess typically watch the show from the front row. After all of the winners are announced, they take the stage for a final photo. I, Tonya star Allison Janney, opened up about her hilarious barefoot interaction with the royals. The Duke and Duchess of Cambridge previously attended the ceremony in 2018, 2017, and 2011 Photo: Getty Images

After winning the award for the film, the actress revealed that she removed her shoes – but then had to take the stage to meet William and Kate. “Kate, I meet her first, and she’s my height. I’m standing there, and I don’t have any shoes on,” she told Jimmy Kimmel. “And she says “I’ve got really high heels on’ and she’s pregnant. So, I tell her 'honey, you need to take those shoes off.’” This year’s ceremony will honor The Favourite, A Star is Born and Roma, which earned seven nominations.