Even our favorite celebrities suffer from bad hair days. Though lucky for us, Eva Mendes has just revealed her “solution” for those days when our mane just won't cooperate. The Cuban actress, 45, took to social media on Tuesday, August 20, to share a video of herself tying her signature head scarf. “My solution to a bad hair day ❤️,” she captioned the post. The clip shows the mom-of-two seamlessly winding a green patterned scarf around her head.

Fans may recall that Eva gave a tutorial on how to tie a head scarf back in 2013 at Lucky Magazine's Fashion and Beauty Blog Conference. She noted that with the remaining ends of the scraf, “You can leave a bow out if you're feeling a little creative,” though she noted, “I’m a little too old for that now.”

The fashion designer has previously spoken out about her love for head scarves. After sending models down the runway for her Eva Mendes Collection for New York & Company show in 2016, the actress told The Cut that she had always envisioned a turban for the collaboration. Recalling when she first visited New York & Company’s offices three years prior, she revealed, “I had a head wrap on, like a head-wrap, turban-ish thing—not a full-on turban—and I was like, ‘Okay, we gotta get into turbans.” 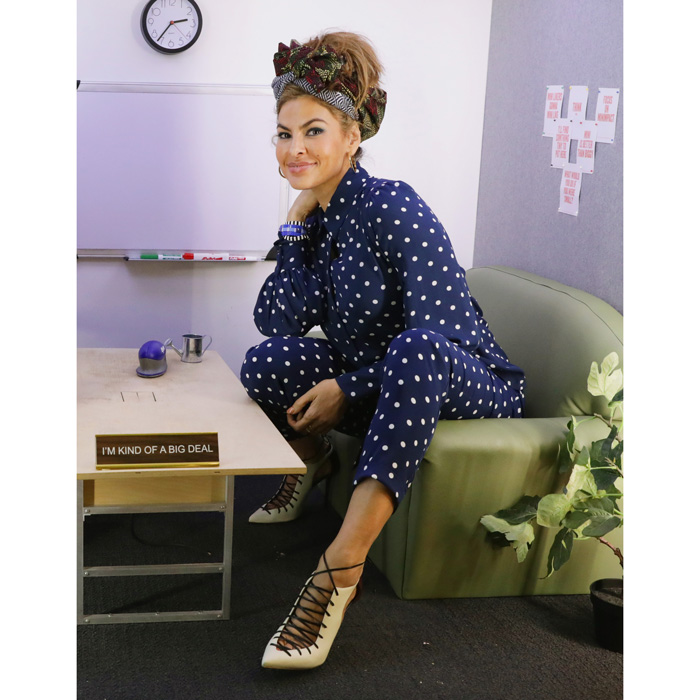 Eva Mendes is known for her signature head scarf

Eva continued, “I remember the CEO, Greg [Scott] who I love so much, he was like, ‘This girl’s wacko. Turbans are not going mass, there’s no way.’ And then, suddenly, they were kind of everywhere, and I think when little moments like that happen, [the company’s] trust has grown in me.”

Ryan Gosling’s longtime love is never one to withhold beauty or fashion secrets from her fans. Eva has previously dished on products she uses for her glowing skin, including coconut oil, as well a homemade remedy she swears by. She told Glamour UK in 2018, “I make my own exfoliator by adding sea salt in plain yogurt. It really works! I also use baking soda to polish my teeth; it feels great.”