George Clooney is going to be a dad! He and his wife Amal, 39, are expecting twins according to The Talk's Julie Chen. Though the human rights attorney and George have yet to publicly confirm or comment, their friend Julie shared the exciting news on Thursday's show. "Beyoncé is not the only superstar expecting twins. Congratulations are in order for George and Amal Clooney," she said. Pregnancy buzz began when Amal stepped out in this floral number in January Photo: Getty Images

Julie, who attended George's cousin Miguel Ferrer's funeral with her husband, Leslie Moonves, last month continued: "Now, what we did find out that no one else is reporting is that the twins are due this June." The couple tied the knot during a lavish ceremony in Venice, Italy after a whirlwind romance in September 2014. Amal, who joined her husband at a screening of The White Helmets in London, sparked baby buzz as she sported a floral shirt dress. 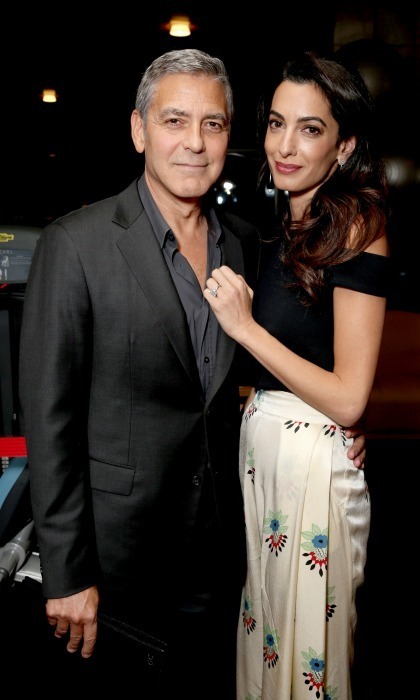 Amal and George wed in a lavish affair in Italy Photo: Getty Images

GALLERY: THE COUPLE'S SWEETEST PHOTOS TOGETHER

Just one year after saying "I do," the 55-year-old told CBS This Morning's Charlie Rose about his future as a father. "I mean, I've thought about it," he shared. "I've been asked about it a lot lately because I've gotten married and I'm doing a movie with kids in it. You should see how different, how creative the way they ask me!"