Love might very well be the best medicine when it comes to former President George H.W. Bush and his wife Barbara. The couple’s granddaughter, Jenna Bush Hager, took to her social media on Tuesday, January 24 to share an update on her grandparents, who were both recently hospitalized.

Sharing a photo of the former first lady and 41st president of the United States in his hospital bed smiling, Jenna wrote, “The power of LOVE in a picture.” She added, “Doctors said they are each other's biggest strength in healing. Thanks for your thoughts. Xx.”

The photo marked the first of the pair, who have been married for 72 years, since they were hospitalized. George was admitted to Houston Methodist Hospital on January 14 for shortness of breath, where he was treated for pneumonia.

Barbara and Jenna Bush pen letter to the Obama girls

While the 92-year-old was moved out of the intensive care unit on Monday, his wife, who was being treated for bronchitis, has already been discharged. Due to their illnesses, the couple was forced to miss the inauguration of President Donald Trump last Friday. 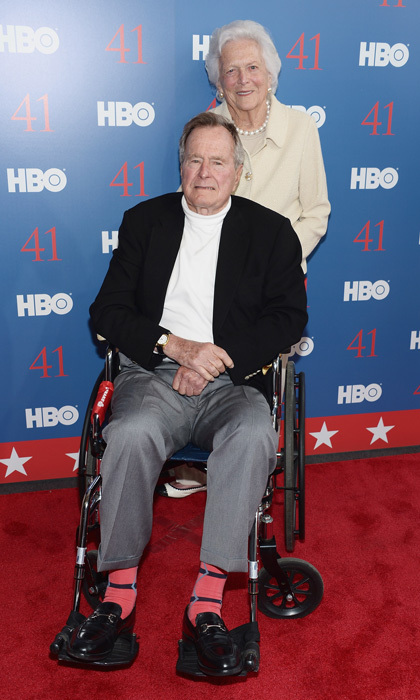 On Monday, the couple thanked well-wishers via their spokesman Jim McGrath. Jim tweeted, “President and Mrs @GeorgeHWBush thank their fellow Americans and friends from around the world for their prayers and good wishes.”

HIGHLIGHTS FROM THE 2017 INAUGURATION

The pair's granddaughter isn't the only person who seems to believe their relationship played a part in their recovery. While discussing George and Barbara, 91, on January 23, Dr. Clint Doerr, who has been treating the former first couple, admitted to reporters, "They're therapy for each other.”