Ashton Kutcher and Mila Kunis are thrilled after becoming parents for the first time. Their little girl was born on Tuesday at Cedars-Sinai Medical Center in Los Angeles, an American publication confirms.

The couple arrived at the hospital together at around 6am and were taken immediately to the delivery room, reports TMZ.

The happy news comes after the couple's engagement in February when the actress stepped out with a huge sparkler on her ring finger and posted a tender selfie with her beau, in which they could be seen beaming with joy.

Mila Kunis and Ashton Kutcher have welcomed a baby girl

Mila, 31, first spoke about her pregnancy to Ellen DeGeneres, revealing that her attentive fiancé had stocked up on special foods in case she had cravings.

Mila and Ashton, 36, have been looking more in love than ever recently. The duo were caught on the Kisscam at a basketball game in March and were also seen hugging each other tenderly at the Stagecoach country music festival.

The long-term friends, and former That 70s Show co-stars, started dating in 2012. Their relationship began after Ashton split from his wife of six years Demi Moore.

The happy news comes after the couple's engagement in February

"I will forever cherish the time I spent with Demi," he wrote at the time. "Marriage is one of the most difficult things in the world and unfortunately sometimes they fail."

Now the heart-throb actor has been given a chance to begin a fresh chapter in his life and a new house to do so in.

The new parents are thought to have bought a Beverly Hills mansion for $10.2million. 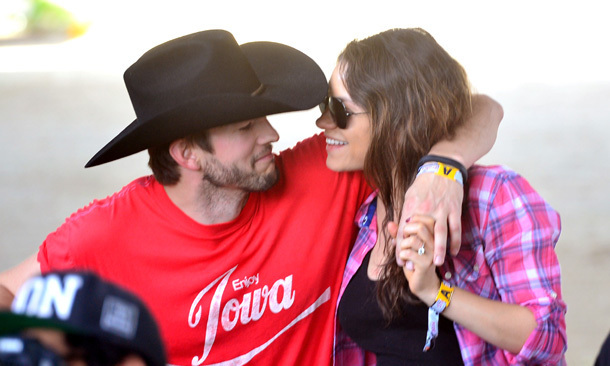 The pair have appeared more loved-up than ever throughout Mila's pregnancy, here pictured at a country music festival

It is said to be "perfect for a family," and "very traditional and different" from his last two modern homes with access to "hiking trails just outside their front door".