Whether she’s dancing the night away onstage or strutting down the red carpet, Jennifer Lopez always steals the spotlight with her inimitable style. The 49-year-old superstar has created countless iconic fashion moments over the years, but one sticks out in her mind as the “biggest ever.” Taking to her Youtube channel for the premiere episode of “Moments of Fashion,” JLo revealed the wild story behind what she believes to be her most incredible style moment yet.

Scroll to watch the full video! 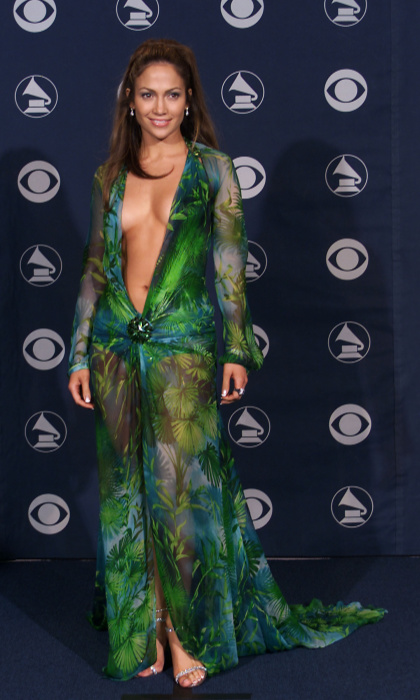 “Probably my biggest fashion moment ever, was wearing the green Versace jungle print dress,” the mom-of-two prefaced to the camera. She was, of course, referencing the exotic plunging ensemble she famously wore to the Grammy Awards in 2000. It turns out the chiffon dream was a last minute choice!

“I was nominated for a Grammy that night and I was filming Wedding Planner at the time with Matthew McConaughey,” she said, adding that she “just didn’t have time” for a fitting until the day of the awards ceremony. “I was filming movies and recording music - I was doing all kinds of stuff. It just kind of crept up on us.”

“Usually if you come to a fitting of mine, there’s tons of dresses and tons of shoes - it’s crazy! There’s always so many choices,” she continued. However, this last-minute one was different. “We really had a choice between two dresses. One was a white dress or something and the other was the Versace jungle print dress.” Her expert stylist, Andrea Lieberman, had a strong opinion on the frock her client should wear. 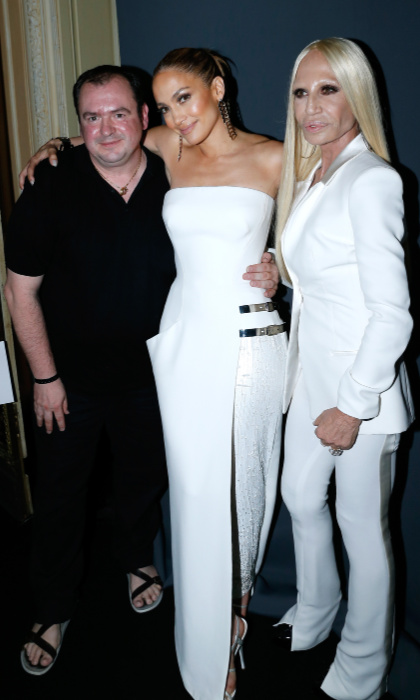 “My stylist goes: ‘I think you should really wear the white dress, because three people have worn this dress - Donatella [Versace] herself - it’s been seen. This is the Grammys, you need to wear something else!’ And I was like, okay - Let me try on both and let’s see.” Upon slipping into the tropical frock, Benny Medina, who she described as her “longtime manager, Godfather to my children and my trusted consigliere,” exclaimed: “‘That’s it! That’s the dress!’ And, of course, my stylist is mortified. We have had many beautiful, iconic moments over the years in videos and on red carpets. She was opposed to me wearing the dress because somebody’s worn it before and that’s like a no, no!’”

The only concern left was “whether or not my boobs were going to pop out onstage!” Their expert solution was to lay double-sided tape down and stick the dress to it. “So everybody having the same thoughts like ‘is this dress going to blow open? It’s so low cut!’ I get that was fascinating for people, but there was never any danger of that. I was so securely stuck into that thing.”

It seems the World of Dance judge will never forget the moment she arrived in the dress. “As we hit the red carpet, there was a bit of a… bottleneck! It was funny because as we start walking in, you start hearing like a little murmur. I’m looking around - cause it’s the Grammys - and I’m thinking there has to be somebody famous behind us. All of a sudden, everybody kind of starts moving and making room for us. We hit the red carpet and it was a frenzy… in a way that it’s not usually.”

Where should we have these sent? 🌿 pic.twitter.com/mZvrQXIw3m

JLo’s dress wasn’t only iconic for the fashion industry, but the entire world. “Years later, I found out that because of that night, because of that dress, Google Images was actually created. That so many people went searching for this and they had no way to search a picture at that time on the internet, so they created Google Images.” She then joked: “Where’s my check?” To which Google cheekily replied on Twitter. Jennifer tearfully dedicated the video to her friend of 20+ years, Luigi Massi, a designer for Versace who passed away.