Queen Letizia broke out one of her most memorable looks on a special day. The Queen of Spain and her husband King Felipe visited the Mausoleum of King Mohammed V on February 14, during their visit to Morocco. Letizia stepped out in a very familiar outfit for the engagement. The mother-of-two wore an all-white pants suit by Armani. The look holds sentimental value for the royal, who wore it 16-years ago on November 6, 2003, when she and a then-Prince Felipe announced their engagement to the world. 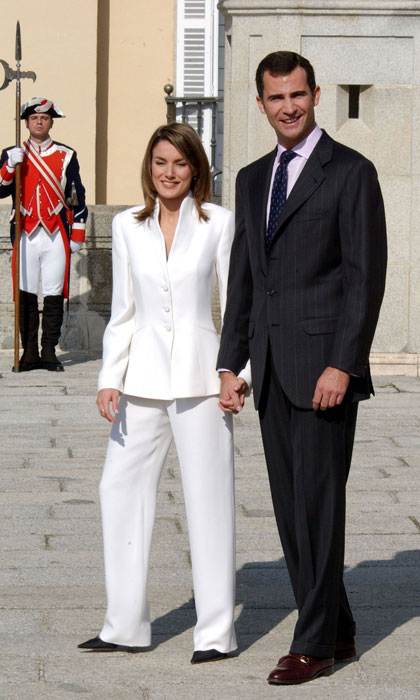 Queen Letizia wore the Armani pants suit for the first time in 2003 when she and Felipe announced their engagement Photo: Getty Images

The chic suit features of blazer with a v-lined collar and three buttons and matching wide-legged trousers. In Morocco, the stylish royal wore a white scarf around her head – as a sign of respect inside of the mausoleum. Although her head was covered, Letizia’s pearl drop earrings peered through. Letizia completed the look with a pair of Magrit stilettos.

In 2003, as she appeared alongside the royal family for the occasion, sans the headdress and with a pair of smaller stud earrings and dark stilettos. The cream look was the perfect match for her stunning wedding band. Felipe presented his wife-to-be with a ring that featured 16 vertically set baguette cut diamonds in a white gold setting. 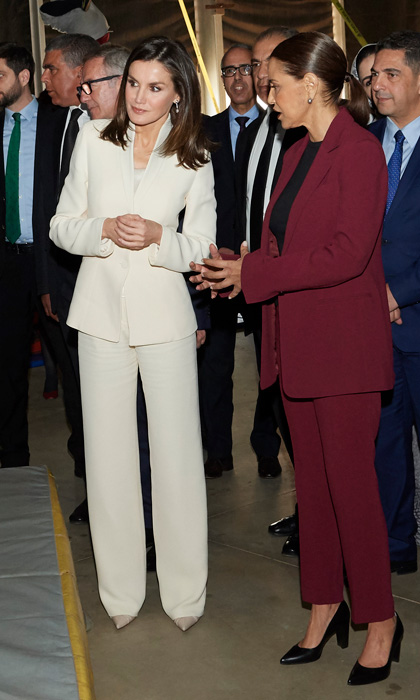 The elegant Queen proved that the look is timeless during a visit to Morocco in 2019 Photo: Getty Images

The ring is a step away from traditional engagement rings that feature a stone set in the center. Letiza has been showing off her chic style during her and Felipe’s royal tour in Africa. Since their arrival, the mother-of-two has shown off her chic style for looks at the airport, galas and various engagements.