Penélope Cruz brought the party with her to the José María Forqué Awards in Zaragoza, Spain. Donning a skillfully-sequined dress, the Oscar-winning beauty shimmered under the flash of photos as she waltzed down the red carpet on Saturday, January 13. The 44-year-old star’s show-stopping elegance was perfectly fit for her status as nominee for “Best Actress” at the glitzy event. While her husband Javier Bardem was nominated as well – for starring alongside her in the Spanish thriller Everybody Knows – he wasn’t in attendance. Although the Spanish-born talent didn’t take home a trophy, she certainly won for her exuberant style.

Scroll to get her style details!

Dazzling in the light, Penélope’s outfit was truly a jubilation. Designed by European fashion brand Ralph and Russo, a favorite of not only her, but royals like Meghan Markle and Kate Middleton, the bejeweled gown was fashioned into a slender mermaid cut. Its’ rosy coloring took over the red carpet, making it known that a true A-lister was in attendance.

For the look, Penélope let her warmly-highlighted locks flow into loose curls. She tucked the right side behind her ear, a signature move, showcasing her diamond-dangling earrings. As far as other accessories, the model kept things pretty subtle – no doubt due to the extravagance of her dress – wearing only a few rings. The nominee grounded her gorgeous ensemble with shiny gold pumps. 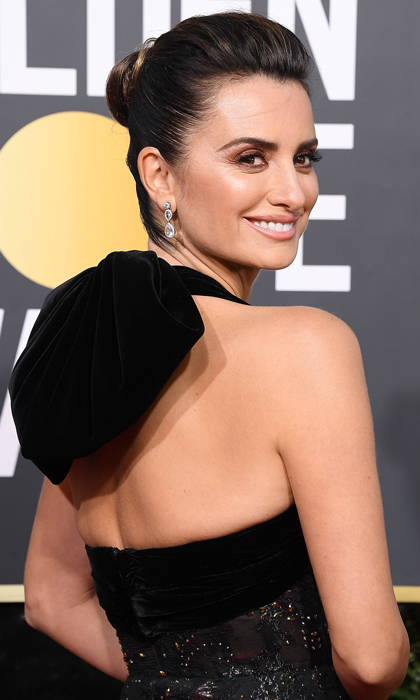 Her makeup was delicately painted on, exuding the same bronzed tone as her fashion pieces. It was a similar look to her glamorous Golden Globes makeup – a ceremony that she also chose to wear a Ralph & Russo confection to. For the occasion, her trusty makeup artist Charlotte Tilbury called upon easily obtainable products to give the entertainer radiant skin and sultry eyes – get more details here!