The Victoria's Secret Angels have touched down in Paris ahead of filming for the annual Fashion Show. Models including Kendall Jenner,Bella Hadid and Alessandra Ambrosio boarded the Victoria's Secret plane departing New York on Sunday, and shared photos from their exciting trip on social media.

All kitted out in matching pink t-shirts with the words "Victoria's Secret Paris 2016" the models were in high spirits as they waved French flags for photos ahead of boarding the plane. 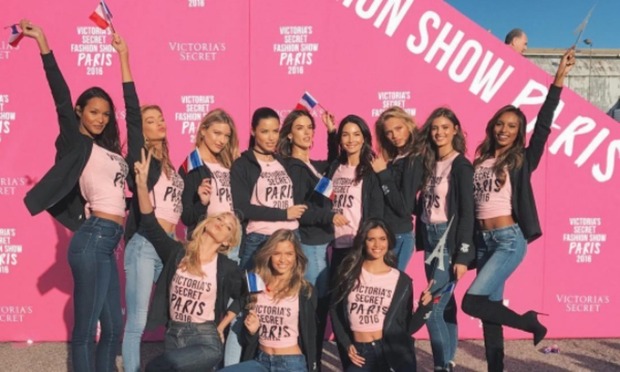 Taylor Hill shared a photo of herself alongside a group of her colleagues preparing to board the plane, writing: "Angels in the air!"

Meanwhile Kendall, 21, posted a photo of herself with Bella Hadid, 20, Lily Donaldson, 29 and Joan Smalls, 28, saying: "We're off!" Joan also shared a similar photo on her own account, adding the caption: "All aboard the @victoriassecret plane. Let the fun begin." 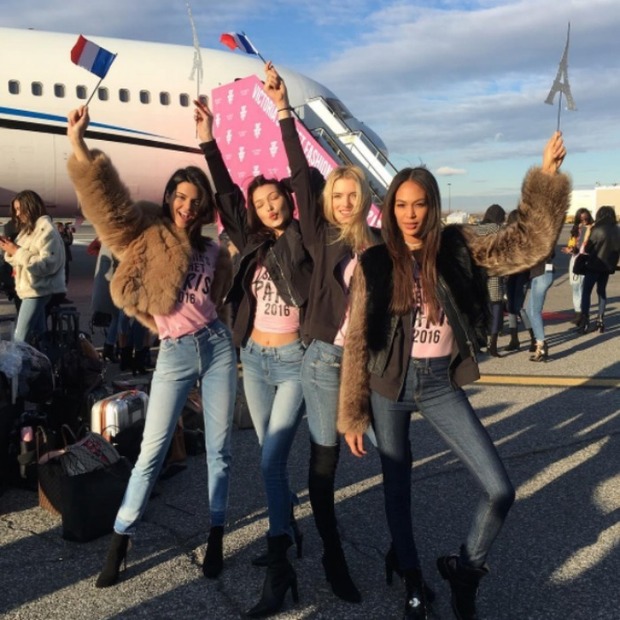 Kendall Jenner, Bella Hadid, Lily Donaldson and Joan Smalls posed with their flags outside of the plane Photo: Instagram/@kendalljenner

The models had fun inside and outside of the plane. Photos posted on the official Victoria's Secret Instagram account showed the likes of Jasmine Tookes, 25, and Josephine Skriver, 23, reclining on their seats, while Alessandra Ambrosio, 35, even had the opportunity to meet the pilots in the cockpit.

"Taking off… next stop #Paris #vsfsparis16,"Alessandra captioned the photo of herself surrounded by three members of the crew. 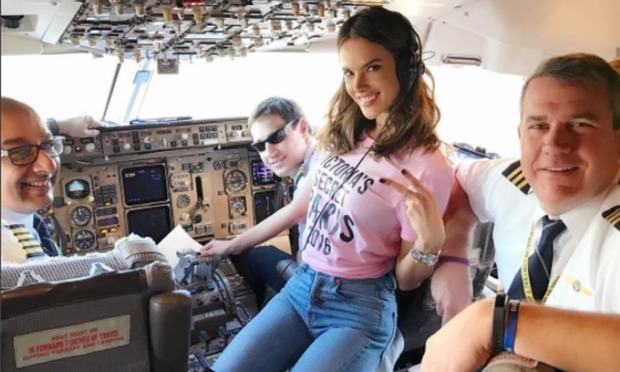 Alessandra Ambrosio got to spent some time with the crew in the cockpit Photo: Instagram/@alessandraambrosio

The models are set to film the fashion show in the French capital on Wednesday, November 30, with the finished recording set to air on TV December 5 at 10pm on CBS. While the majority of the lingerie brand's iconic Angels are taking part, two people sad to be missing out on the big night are Behati Prinsloo and Candice Swanepoel, who have both recently become mothers.

Behati, 27, posted a photo from when she walked in the show, wishing her colleagues luck. "To the girls and crew, good luck in Paris, me and Dusty Rose will be cheering," she wrote. "I know the blood sweat and tears that goes into the making of this show and also being in it, this would have been my 10th year. I can't believe it."

Guys! Goodluck in paris beautiful ladies! So sad to be missing this show! No doubt it will be magicalSo hard for me to disappoint the people that always root for me, I wish I was there making you all proud. ☺️ Girls, enjoy the moments together, cant wait to see the show and Can't wait for vsfs2017! 

ALL THE CELEBRITY BABIES BORN IN 2016

Similarly, Candice, 28, wrote next to a photo of her participating in a past show: "So sad to be missing this show! No doubt it will be magical. So hard for me to disappoint the people that always root for me, I wish I was there making you all proud.

"Girls, enjoy the moments together, can't wait to see the show and can't wait for vsfs2017!"