Not only has Brooklyn Beckham inherited his father David Beckham's looks and knack for soccer, he has a flair for fashion, thanks to mom Victoria Beckham. The stylish teen isn't afraid to experiment with his look, and even dares to push the boundaries - especially when it comes to his accessories.

Recently, the oldest Beckham boy was seen at a Grammys afterparty in Los Angeles. At first glance, there's nothing too special about the outfit. However, if you take a look at his right wrist, you'll notice that Brooklyn is actually wearing a ladies bracelet. It's not just any bracelet, either. That gold beauty is Cartier's Juste un Clou, an 18-carat bracelet that costs upwards of $6,800. 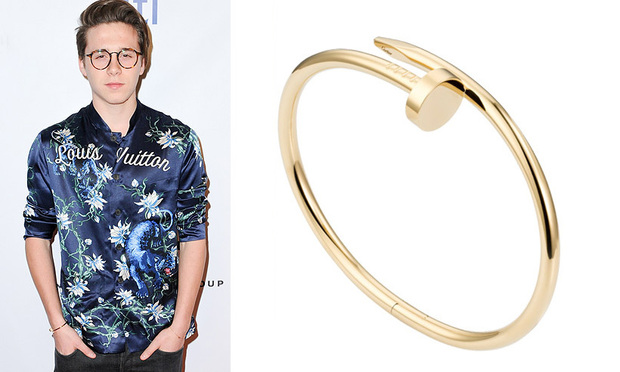 Brooklyn Beckham looks chic in a Louis Vuitton silk shirt and tortoiseshell glassess - but his right-wrist accessory is the real talking point of this outfit. Photo: Getty Images/Cartier

This popular Cartier accessory has been seen on the wrist of many famous ladies, including Kendall Jenner, Olivia Palermo, Karlie Kloss, Miranda Kerr and Kristen Stewart. According to the French fashion house the design, which was created in 1970s New York is "the expression of a rebellious nature and the reflection of self-belief" and "both modern and daring".

Brooklyn was again seen wearing the bracelet a few days later at an after party for the BRIT Awards in London. It seems as if the 16-year-old has a new favorite accessory!

The teen seems to be following in the metrosexual footsteps of his famous father, who is a fan of arm jewelery and isn't afraid to wear nail polish on occasion. We love that Brooklyn is comfortable with wearing a bracelet from what's essentially a line of women's jewelery - and rocking it! 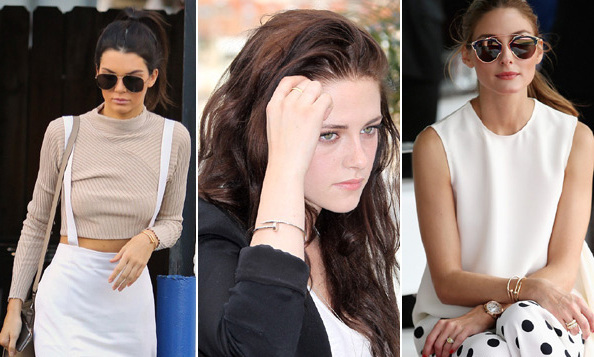 Fans are waiting to see if Brooklyn will take after his mother and start a career in fashion, or if he'll go down the soccer route like his father. He does have a few modeling gigs under his belt, but seems to be more comfortable in front of the camera. In an interview with Miss Vogue about his future, the teenager had this to say: "I love [soccer], but I'm also very passionate about photography and film. I'm keeping my options open right now."

Recently, he was chosen to be the photographer for Burberry's latest fragrance campaign.