T-minus seven days until the 2015 Victoria’s Secret Fashion Show airs — and Selena Gomez along with a bevy of Angels are already counting down to the big event with a new promotional video.

On Tuesday, the brand released their annual lip sync video ahead of the fashion show. This year’s song “Hands to Myself” belongs to VS newcomer Selena. The 23-year-old took to the brand’s runway for the first time last month during the show’s taping to perform her song “Me & My Girls.” 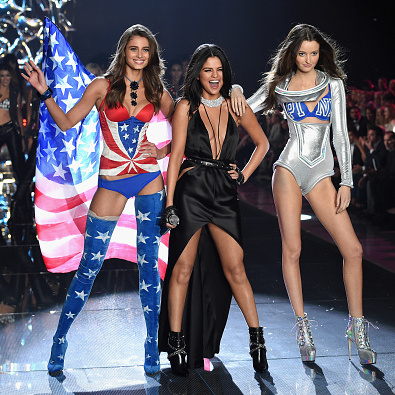 In the new video, the stunning brunette dons a sultry black dress as she sings her song “Hands to Myself," which she performed at this year's show, while supermodels Candice Swanepoel, Behati Prinsloo and Lily Aldridge (among others) lip sync along!

While the girls can't keep their hands off themselves this year, last year the models shook it off and lip synced to Taylor Swift’s hit “Shake It Off.” Taylor performed two years straight on the VS runway before Selena made the catwalk her personal stage this year.

Prior to the 2015 show, model Lily Aldridge told HELLO! that while she missed not having bestie Taylor perform this year, the two had texted beforehand and she revealed that “[Taylor’s] so excited and Selena is one of our great friends and it’s going to be an amazing show.”

WATCH SELENA GOMEZ AND THE VS ANGELS SING BELOW