Vivienne Westwood has called on a slew of stars to support her ongoing Save The Arctic campaign. The fashion designer tapped George Clooney and Kate Moss along with 57 other famous faces to model for the cause.

Supermodel Kate poses in a 'Save The Arctic' t-shirt covered by a leather jacket while George wears a satin tux and bow tie over his t-shirt.

CLICK TO SEE WHO ELSE IS FIGHTING FOR THE ARCTIC 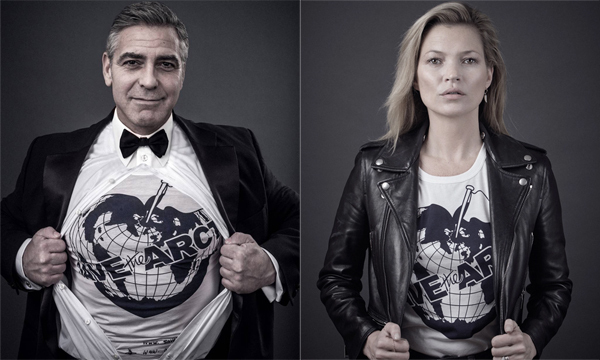 Other stars in the campaign, which has taken 18 months to create, include Naomi Campbell, Hugh Grant, The Avengers actor Tom Hiddleston and Nicole Scherzinger.

"The status quo will kill us. People don't realize how quickly we are marching toward a possible mass extinction," said Vivienne about the campaign. "Once the global temperature goes up beyond two degrees, you can't stop it. Current predictions are that we will see a rise of more like 4c or 6c, which would mean that everything below Paris would become inhabitable." 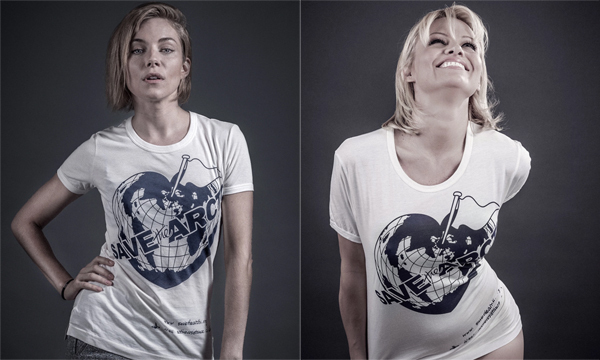 The photos will be shown at Waterloo station in London for two weeks. The placement was strategic – the station is close to Shell's British headquarters.

Vivienne Westwood is well known for her activism. In recent years, she has focused on reforming business policy, the ecology of climate change, anti-fracking events and supports the charity Cool Earth's efforts to preserve the rainforests.

Support the cause by buying your t-shirt here: http://www.viviennewestwood.com/shop/mens/clothing/t-shirts