She's attended several of her family members' weddings, but it was Kendall Jenner's turn to be the bride as she walked in Chanel fashion in Paris on July 7. The 19-year-old model closed the show as the iconic Chanel bride, wearing a double-breasted white satin trousers suite featuring a trailing tulle hem.

The Keeping Up With the Kardashians star's mom Kris Jenner showed her pride for her daughter, uploading a photo to Instagram and writing: "I am SOOOOO proud of you Kendall!!!!!!! #proudmama thank you@karllagerfeld @chanelofficial ....#amazing#youclosedtheshow!! #motherofthebride."

It wasn't just Kendall's appearance that made the show dazzle. Karl Lagerfeld is known for putting on unusual displays when it comes to his Chanel fashion shows and the fashion maestro did not disappoint with his Autumn/Winter 2015 presentation, which took place inside a Chanel Casino. 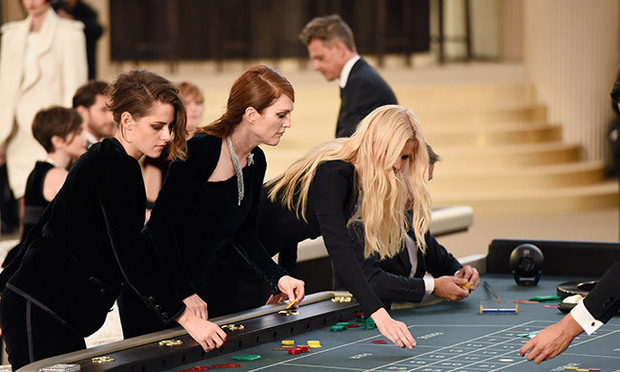 The group of A-listers turned heads as they opened the show Photo: Getty Images

Famous actresses Kristen Stewart, Julianne Moore and Lily Collins made for the ultimate group of glamorous gamblers as they opened the show, making bets on a roulette wheel and Blackjack located in the centre of the opulent Grand Palais. The catwalk also featured some famous faces like songstress Rita Ora who took to the runway.

The leading ladies were joined by fellow celebrities Vanessa Paradis, a longtime muse for the designer, and her daughter Lily-Rose Depp. The dazzling group modeled Chanel diamonds as they played at the table, as well as outfits that are coming to London for a Chanel exhibition in autumn.

It was Kendall's second show in Paris Couture Week – on Sunday, she had starred in Atelier Versace with friends Karlie Kloss, Joan Smalls and Doutzen Kroes.

Karlie shared a snap of the ladies sporting their looks for the show, which included floral crowns and flowing gowns as they walked a runway covered in 26,000 orchids. "Backstage Beauties @versace_official," she captioned the shot. Doutzen then reposted the picture, writing: "Fun with my girls."

Kendall's Paris appearance comes after a trip to London. The model was in the capital for a few days, taking the opportunity to explore the city with a group of friends including Gigi Hadid.

Click on the pictures below to see Kendall as the Chanel bride: