Like every festival whether it be Coachella in the desert of California or Governor's Ball in New York City, the celebrities turn up time and time again in their best festival fashion. The Glastonbury music festival in the U.K. is no different, but it seems there was one staple all the stars didn't leave home without — their wellies (or better known as rain boots!)

This year, the leading ladies included Stella McCartney, Suki Waterhouse and Alexa Chung. Each lady showcased their own sense of style, finding time to pair their wellies with dresses or jumpsuits. Reality TV starlet Kim Kardashian was on the scene to see husband Kanye West perform, complete with her own maternity style, but she left her all-purpose boots in the chopper.

Perfect shoes for Glastonbury! LOL (have my wellies in the car don't worry)

Kim kept it casual in a black dress Photo: Instagram/@KimKardashian

Stella McCartney topped best-dressed lists when she arrived at the festival to watch Pharrell Williams perform. The designer was in fashionable form while wearing one of her own designs, choosing a chic navy blue jumpsuit with a white polka dot print, and accessorizing with a black cross-body bag and a pair of black Hunter boots.

Fashionista Alexa Chung was also spotted wearing Hunter boots, and accessorising each of her outfits with her beloved wellies. As always, the British beauty showed off her style credentials in effortlessly cool outfits, but particularly turned heads when she wore a sleek metallic short-sleeved minidress with a high neck. 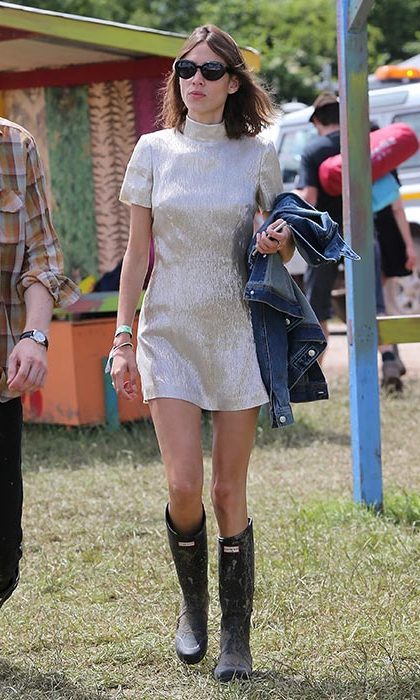 Meanwhile, singer Adele who has been keeping a relatively low profile in recent months, made quite the impression for her rare public appearance, winning with her boho-chic outfit. The "Rolling in the Deep" hit-maker looked effortlessly cool in a show-stopping tunic which featured a red Aztec-printed bodice and black skirt, which she wore over black jeans and matching ankle boots. 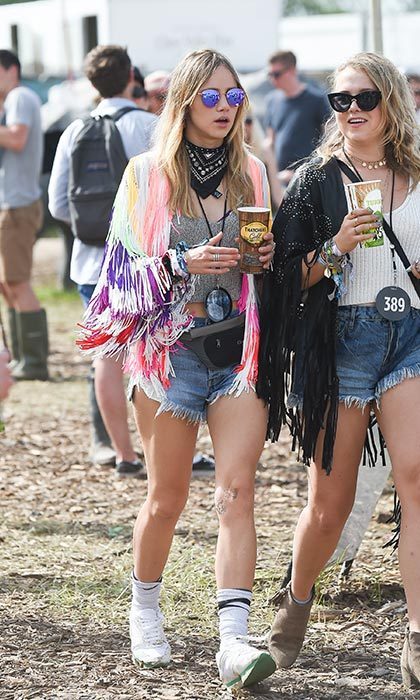 Blonde beauties Cressida Bonas and Suki Waterhouse also dressed to impress as they made the most of the rare British sunshine at the festival. Cressida rocked a striped grey and white playsuit with a quirky tomato print, adding a white shirt and wellington boots for a laidback look.

Meanwhile, Suki was the epitome of festival chic in an edgy multi-coloured fringed poncho, worn with a grey crop top and denim shorts, completing the look with white trainers. 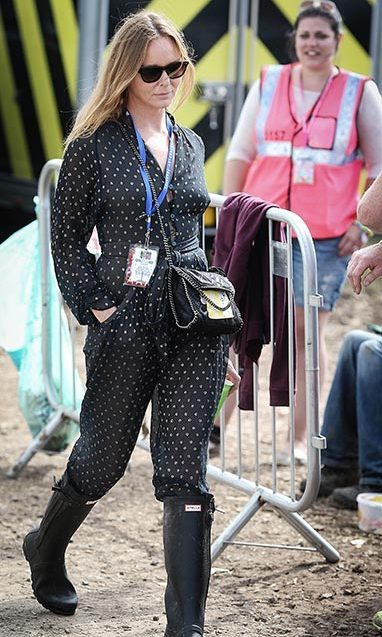