The stylish royals were certainly out and about this week. From Spain to Sweden, the ladies of the various monarchies kept on trend in blues, black and white and metallic.

It seems as if Kate Middleton and Queen Elizabeth coordinated their outfits to their outings. Both the Queen and the Duchess of Cambridge brightened up a gloomy week in blue hues. Kate wore her Sportmax coat over a floral Seraphine maternity dress on a visit to the Emma Bridgewater factory to view pottery that benefits one of her causes, and then to Cape Hill Children’s Centre. The elder royal wore a bright blue tweed coat to the reopening of Canada House. Queen Elizabeth also wore a dashing silver jacket to a reception at St. James Palace earlier in the week.

In Spain, Queen Letizia had only one color scheme on her mind – black and white. For three different appearances, she opted for the simple tones but added a pop of color elsewhere. In a striped T-shirt and a high-waisted skirt, she accompanied her husband King Felipe VI to the inauguration of the First Picasso exhibit in A Coruna, Spain. Letizia was also on hand in a Madrid for the 10th anniversary of the BBVA Foundation. For that event, she wore one of her favorite tops by Danish label, Designers Remix. Lastly, the Spanish royal wore a black and white dress to the National Culture Awards.

And don’t think new mom Princess Charlene of Monaco forgot how to get glam! The royal dazzled in black sequins as she attended an event benefiting her charity with her husband Prince Albert to celebrate the birth of their twins at the Monte-Carlo Casino.

See all the other fashionable royals who stepped out this week: 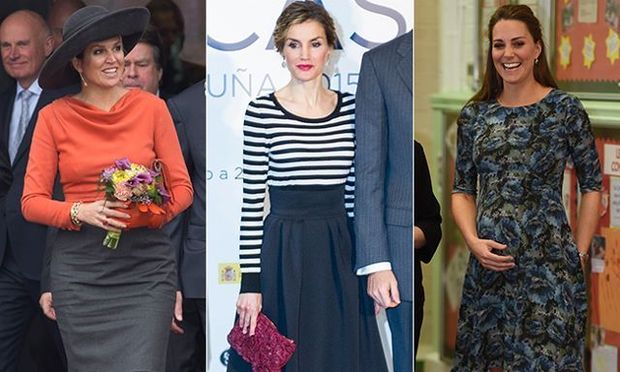