For the next six months, wedding dresses worn by some of the biggest celebrities—like Kate Moss, Gwen Stefani, and Dita Von Teese—will be on display at London's Victoria and Albert museum.

All of the gowns showcased pinpoint a turning point in the history of bridal fashion. Supermodel Kate's John Galliano creation was a defining moment for "boho-chic" brides everywhere, while Gwen and Dita encouraged women to walk downy he aisle in colorful dresses. 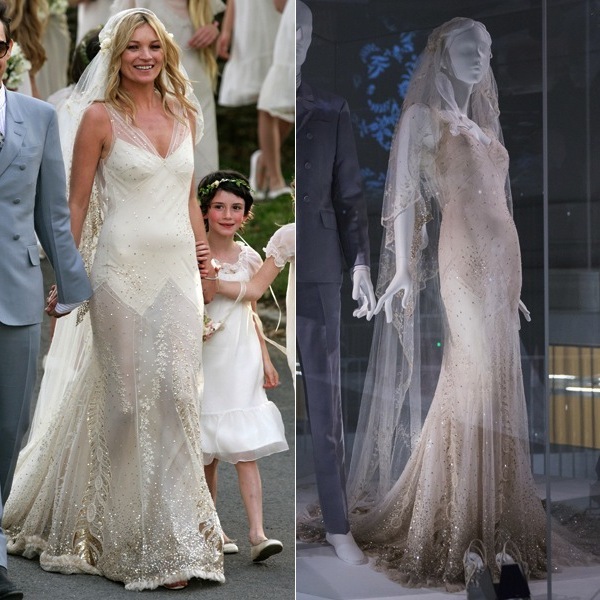 The beautiful designs, along with the more than 80 others on display, are a part of the V&A's current fashion exhibit Wedding Dresses 1775-2014. The exhibition follows the history of wedding fashion, including early pieces through the couture work of designers like Vera Wang and Jenny Packham.

When the 40-year-old model married guitarist Jamie Hince in 2011, she turned heads in a stunning "phoenix feathers" gown and coordinating veil designed by her close friend, renowned designer John Galliano.

The show-stopping "phoenix feathers" sewn onto the gown echoed the movement of the garment's fabric and took more than 700 hours to embroider. Her shimmering veil featured 270,000 gold sequins, 120,000 foil paillions, and 2,800 pearl beads, all of which took 253 hours to apply.

While Kate's ivory gown is a popular choice for brides today. White was a popular color for brides in the 18th century, and became increasingly fashionable when Queen Victoria wore a white gown to marry Prince Albert in 1840. That dress marked a shift in the history of the celebratory gown. Now, brides like Gwen and Dita are leading the charge toward a new trend of color-drenched gowns. 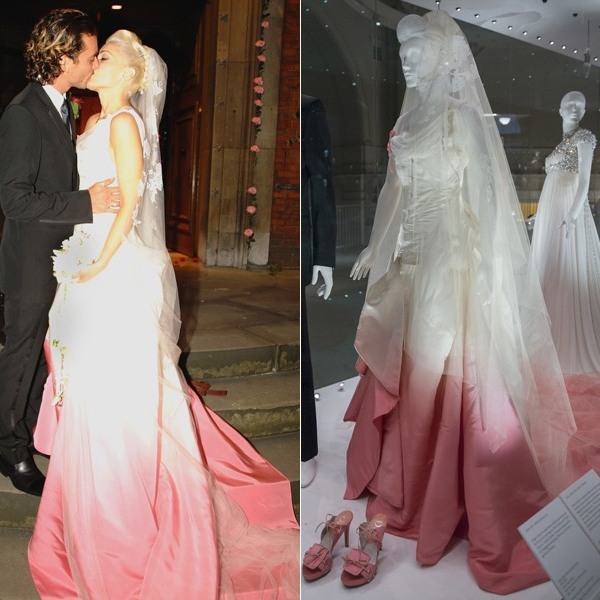 Not to be outdone, Dita pushed tradition even further by wearing a custom purple dress by Vivienne Westwood when she wed Marilyn Manson in 2005. The creation featured a low-cut and waist-defining bodice with a full skirt to emphasize the burlesque dancer's signature curves. 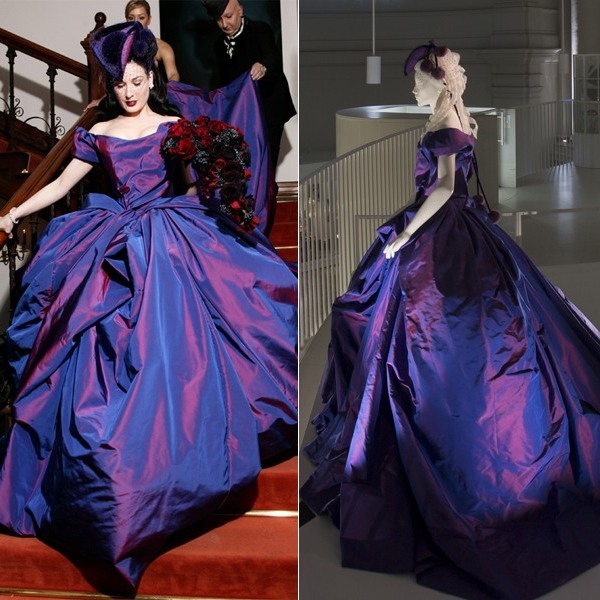 Since their weddings, more and more celebrities are turning to colorful dresses on their wedding day. In recent years, Kaley Cuoco, Jessica Biel and Emily Maynard ditched the white gown for pinker hues.

In addition to these celebrity designs, gowns by Vera Wang, Christian Lacroix, Alice Temperly, Jenny Packham and many more are showcased in the exhibit. Each designer had a hand in the constantly evolving world of bridal fashion.

One of Kate Middleton's favored designers Jenny Packham placed her "Rapunzel" dress on display. The back of the stunning gown is covered in Swarovski crystals while the front has a high neckline inspired by Edwardian costume. 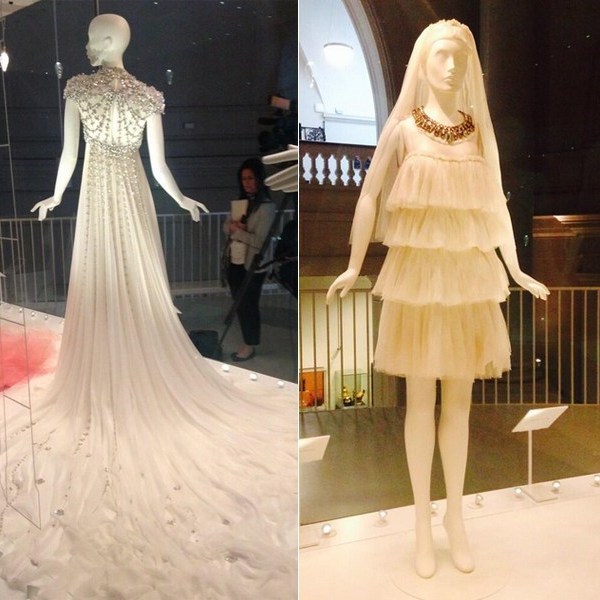 Another designer featured in the exhibit is Ian Stuart, who put his "Flower Bomb" gown on display, and Lanvin submitted a mini dress—reminiscent of the dress Sarah Jessica Parker wore when Carrie Bradshaw played bride in the Sex and the City movie—for the gallery.

Patrons to the exhibit will also see society gowns worn by the likes of Margaret Whigham and Barbara 'Baba' Beaton. Margaret's Norman Hartnell designed, which she wore for her 1933 wedding, is the first dress featured with its sweeping train and intricate pearl-trimmed veil.

Meanwhile, Barbara's gown from 1934 is an ivory-cream silk satin dress. The high neckline and long sleeves may have been common for the time period, but the train, which is split into two pieces, is the most defining aspect of the design.