Nicky Hilton flashed her diamond engagement ring while out and about in New York City, giving fans a first look at the elegant sparkler.

The 30-year-old fashion designer, who got engaged to her long-term boyfriend, British banking heir, James Rothschild earlier this month, was spotted walking around the trendy East Village neighbourhood.

Dressed in a black-and-white patterned dress, Nicky showed off her long legs in a thigh-skimming frock. She completed her monochromatic look with black lace-up boots and shades, and accessorised with a leather satchel.

It was hard to miss Nicky's Asscher-cut diamond ring, which appears to be set in a platinum band and fits perfectly around her ring finger.

"Nicky's ring looks to be a five-carat Asscher cut diamond in the centre with two trapezoid diamonds on either side," said expert David Allen at 77 Diamonds. "The nature of an Asscher cut means you really need to get the highest quality in order to feel the true beauty of the stone so a ring of this calibre and size would be worth around £250,000."

Nicky's banker fiancé James popped the question when the lovebirds were on holiday, celebrating their anniversary with a road trip around Italy.

"They are both really excited and incredibly happy," a source told US Weekly. "He took her out on a boat into the middle of Lake Como and he proposed, got down on one knee and everything. It was incredibly romantic and beautiful."

Five things to think about when buying an engagement ring 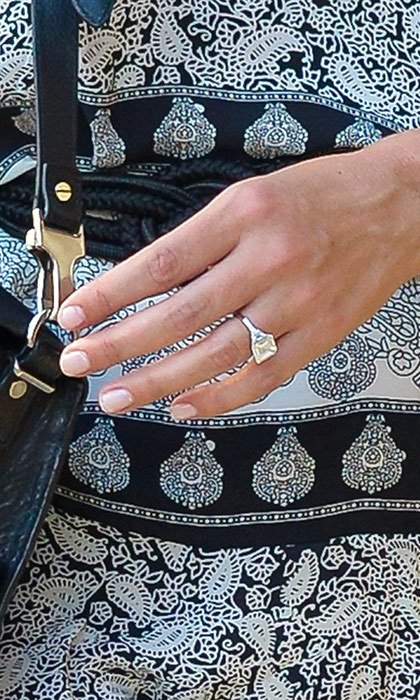 The heiress posted an Instagram photo of herself while on the lake, which showed Nicky lapping up the fresh air and relaxing in a boat – which may well have been the one she said "yes" on.

Her older sister Paris, 33, was quick to congratulate the happy couple by captioning an Instagram photo of the pair with the message, "Congratulations @NickyHilton on your engagement! I'm so happy for you! You will be the most beautiful bride! Such a lovely couple! Love you both so much!"

Engagement rings: what your shape says about you

Nicky and her fiancé first met in 2011 at the wedding of Petra Ecclestone and James Stunt in Odescalchi castle – the spectacular 15th-century Italian fort where Tom Cruise and Katie Holmes also married.

The blonde bombshell previously married her close friend Todd Andrew Meister in 2004 at the Las Vegas Wedding Chapel, but the union was annulled three months later after Nicky and Todd explained they did it "on a whim".