It is a great night for Alicia Vikander! The Danish Girl actress took home her first ever Oscar on Sunday night as she was crowned the Best Supporting Actress. The 27-year-old beat favorite Kate Winslet, as well as fellow nominees Rooney Mara, Rachel McAdams and Jennifer Jason Leigh.

As soon as her name was announced, a shocked Alicia turned to her mother and gave her a big kiss before discreetly giving boyfriend Michael Fassbender, who was seated next to her, a sweet peck. 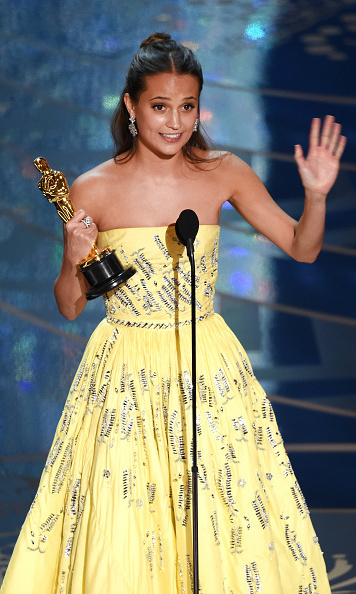 The Swedish beauty, who was being recognized for her role in The Danish Girl, looked visibly moved as she accepted her accolade. The actress thanked her parents, saying she "wouldn't have believed them" if they had told her she would win. "To my mum and dad, thank you for giving me the belief anything can happen."

Alicia also paid a special mention to her co-star Eddie Redmayne, as well as the film's director Tom Hooper. Wearing a Louis Vuitton yellow gown with her hair swept back into a half bun, Alicia looked Oscar worthy in her show-stopping outfit. Fans were quick to comment on social media that the brunette star bore a striking resemblance to sweet Belle from Disney's Beauty and the Beast. 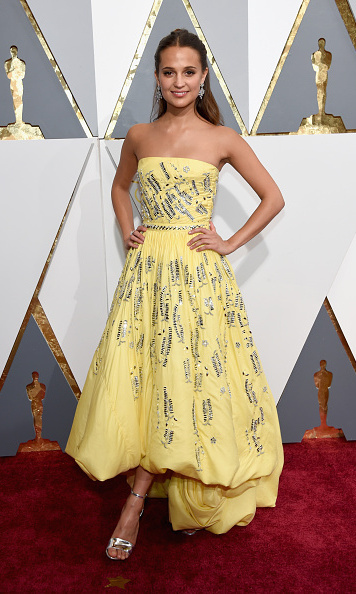 Speaking to E! presenter Ryan Seacrest on the red carpet, Alicia admitted it was "extraordinary" to be at the awards. "I'm at the Oscars, it's crazy," she said. "Being here is so surreal, I have butterflies in my tummy! Being here is extraordinary."

Of her Louis Vuitton gown, she added: "I love the color. It spices it up a bit."

Alicia's win may have come as a welcome surprise to her fans. In the Golden Globes and BAFTA awards earlier this year, her fellow nominee Kate Winslet had scooped the award for Best Supporting Actress for her role in Steve Jobs.

Prior to hitting the red carpet, Alicia has been in Las Vegas filming the newest Bourne movie with Matt Damon.