It’s safe to say Salma Hayek is a pretty active user when it comes to social media. The Mexican star finds time in her busy schedule to amuse her fans and followers with swimsuit pics, snaps of her stylish outfits, videos in which she’s wearing a bird on her head, and of course, good ol’ throwbacks. The latest? A clip in which the brunette beauty is seen dancing and shaking her curves in what appears to be a scene from a movie. Salma looks sexy as ever while dancing with her partner and looks to be having an awesome time. 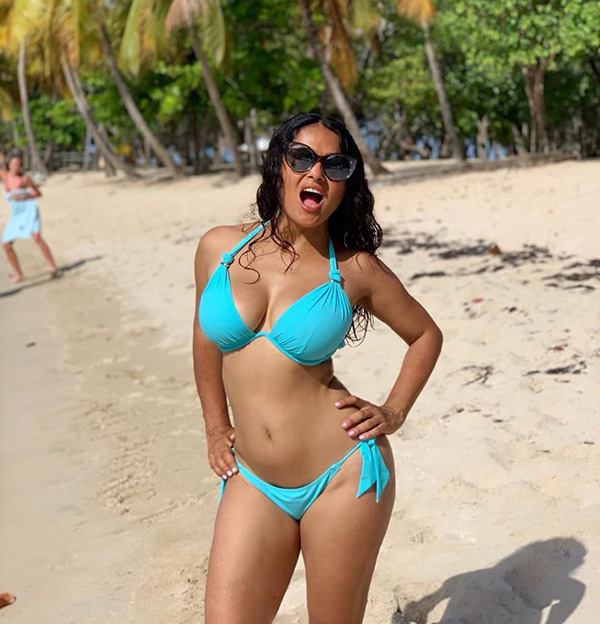 However, the Frida star’s caption gave the impression that she posted the video with a whole other intention as next to the video she wrote, “Once upon a time...when I was skinny.” First of all, at 53, Salma has one of the most stunning bikini bodies, and her fans agree! Many took a moment to comment things like, “You’re still skinny!!!” and “Skinny? You’re without a doubt one of the most beautiful women in the world today.” One other wrote, “Real women have curves.”

Despite her caption, we have no doubts that Salma is perfectly comfortable in her own skin, for she’s not shy about posting sultry bikini pics.

The mom-of-one often takes to her social media to post photos in which she’s away vacationing and she wears not only one-piece swimsuits, but sexy two-pieces too!

MORE: Hot Salma summer: A look back at the star's most daring swimsuits

The Like A Boss actress doesn’t seem to age, and she looks just as fabulous as she did in the early days of her career. A day before her 53rd birthday in September, the Beatriz at Dinner star posted a photo wearing a teeny teal bikini and she wrote, “Yes, tomorrow I’m 53. So!? Si, mañana cumplo 53.” Well, Salma, let’s just say you’re still #bodygoals.