What an emotional night for Selena Gomez. On October 2, the Texan beauty attended the screening of Living Undocumented, the documentary series on immigration she has produced for Netflix. The series narrates the lives of immigrant families living in the US and the obstacles they face every day. “This young girl was separated from her aunt and uncle when they were detained at the border. We’ve all heard the stories on the news, but this is her side of the story. I’m really proud of this and I can’t wait for you to see it,” she wrote on her social media with a heartbreaking teaser clip. 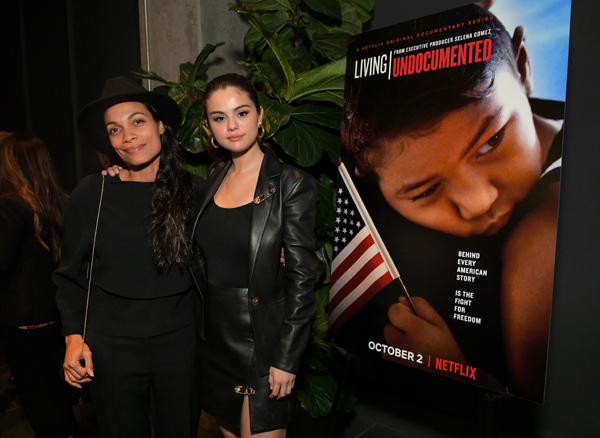 With her hair pulled back in a ponytail, and dressed in a smart black leather ensemble by Versace paired with black stilettos and hoop earrings, Selena looked super sleek, and ready for the challenge. Living Undocumented narrates a story very close to her heart, as she explained in an open letter to Time magazine. “In the 1970s, my aunt crossed the border from Mexico to the United States hidden in the back of a truck. My grandparents followed, and my father was born in Texas soon after. In 1992, I was born a U.S. citizen thanks to their bravery and sacrifice,” she says in the letter.

“It’s time to listen to the people whose lives are being directly affected by immigration policies. It’s time to get to know the individuals whose complex stories have been reduced to basic headlines,” the actress continued in her emotional message. And that’s exactly the goal of Netflix’s new production, that follows the hardships of 8 families on the verge of deportation.

RELATED: Selena Gomez and Sofia Carson are teaming up for a special cause

Selena was joined on stage by actress and friend Rosario Dawson, matching her friend in black, and wearing a trendy fedora hat. Also attending the event were On My Block stars Jessica Marie Garcia, Jason Genao Diego Tinoco and Sierra Capri.