Con Altura from ROSALÍA & J Balvin takes the highest Latinx honor of the night at the MTV VMAs! ROSALÍA, ever the gracious songstress, was dressed to the nines in a black sparkly gown with a high ponytail (showing off her luscious locks) and chandelier earrings. J Balvin, her partner-in-crime, was in a dark periwinkle suit with his green hair (which he dyed to promote his Arcoiris tour). Before ROSALÍA began her speech, J Balvin planted a sweet congratulatory kiss on her cheek. The Con Altura singer shared how she wasn’t expecting to win in her category because of all the amazing talent that she was sharing the nomination with. 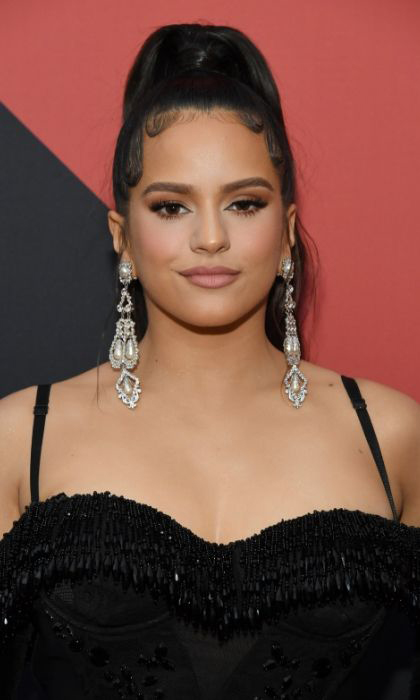 ROSALÍA shared that “It is an incredible honor” to win

MORE: 'And the moonperson goes to...' see full list of MTV VMAs winners

The Spanish singer shared that she was so happy to be there tonight and thanked everyone for allowing her to be able to perform on the MTV VMAs stage in Spanish later on in the show. You can tell that she was in total disbelief as she took several breaks throughout her speech, taking in her big win of the night. She also thanked J Balvin, Ozuna and El Guincho for making music with her. Her biggest thank you went out to her fans.

Shawn Mendes and Camila Cabello were winners of the night too, they took Best Collaboration Award home for Señorita

MORE: Star-studded: all the red carpet looks at the 2019 MTV VMAs

J Balvin also took the opportunity to take his fans for their support and for being able to perform on the VMAs stage in Spanish as well. However, he also sent a strong message about the fires that overtook Brazil's Amazon rainforests, urging people to get involved. Before he can get more of his message out, the music cut him off.