Over the weekend, stars flocked to the D23 Expo in California to hang with fans and promote their upcoming Disney and Marvel films. Everyone was there — from Dwayne “The Rock” Johnson to Latinx superstar, actress and activist Salma Hayek. The 52-year-old actress, who will be playing Ajak in the highly-anticipated Marvel movieThe Eternals, was there sharing some behind-the-scenes details about her upcoming superhero role. 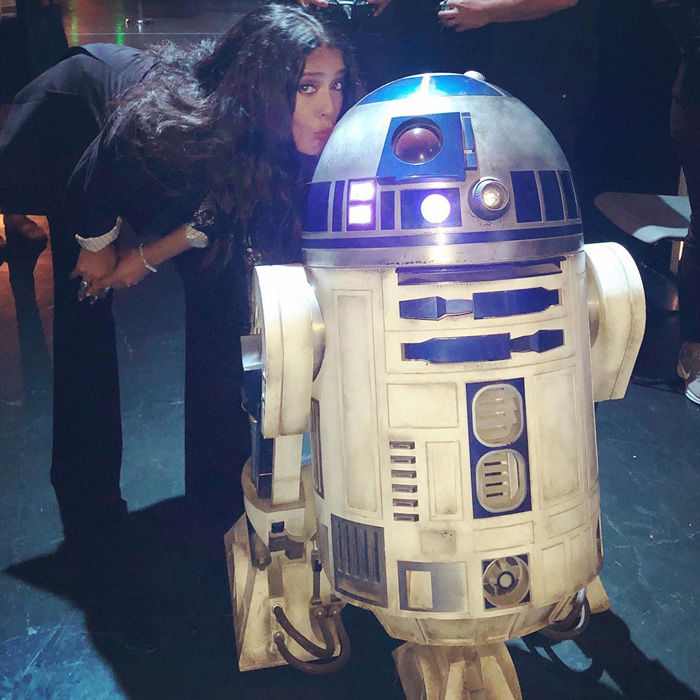 MORE: An incredible lineup of A-List stars feel the magic at D23

What she probably wasn’t expecting was to run into her longtime childhood crush: the ever so sassy R2D2 (or Arturito for many in the Latinx community). Not missing the opportunity to share this momentous occasion with her fans (and the world at large), Salma snapped a quick pic with the famous robot from the Star Wars franchise before he is effectively out of a job (the final film in the Skywalker saga, Star Wars: The Rise of Skywalker, drops December 2019).

MORE: What our favorite Latinx celebs are doing to celebrate the end of summer

The D23 expo is a convention that gathers every year to promote upcoming films for Disney. It's also a chance for fans across the globe to come together and celebrate all things Mickey Mouse. While at the expo, Salma shared deets on her role as Ajak, a superhuman being within the Marvel cinematic and comic book universe’s upcoming film The Eternals. So far, the cast includes Game of Thrones veterans Richard Madden (Ikaris) and Kit Harington (Black Knight) as well as Angelina Jolie as Thena. In an interview with ET, the Bliss actress shared that her role is “kind of the leader” of the group, but with a motherly twist to it that was implemented by director Chloé Zhao.