“Some new, some old, some fast, some slow.” These contrasting adjectives describe Barack and Michelle Obama’s official 2019 summer playlist. The former First couple gifted the world with an end of the season treat as they shared 44 of their current favorite songs on Saturday, August 24. While iconic artists like Beyoncé, The Rolling Stones and Stevie Wonder graced the list, we loved discovering that there was strong Latinx representation as well!

Camila Cabello and Shawn Mendes' Señorita made the cut

Sizzling at number 17, is summer’s hottest real-life couple: Camila Cabello and Shawn Mendes for their collaboration: Señorita. The duo’s spicy tune clearly captivated the former President and First Lady’s ears as much as ours. As did Rosalía and J Balvin's chart-topper Con Altura which nabbed stop 31. Of course, these weren’t the only starry pairs to appear. More major music couplings like Drake and Rihanna popped out amongst a sea of respected artists.

MORE: Are Camila and Shawn performing at the MTV VMAs together?

“With summer winding down, here’s a sampling of what Michelle and I have been listening to - some new, some old, some fast, some slow,” The 58-year-old public figure wrote along with the playlist. “Hope you enjoy.” 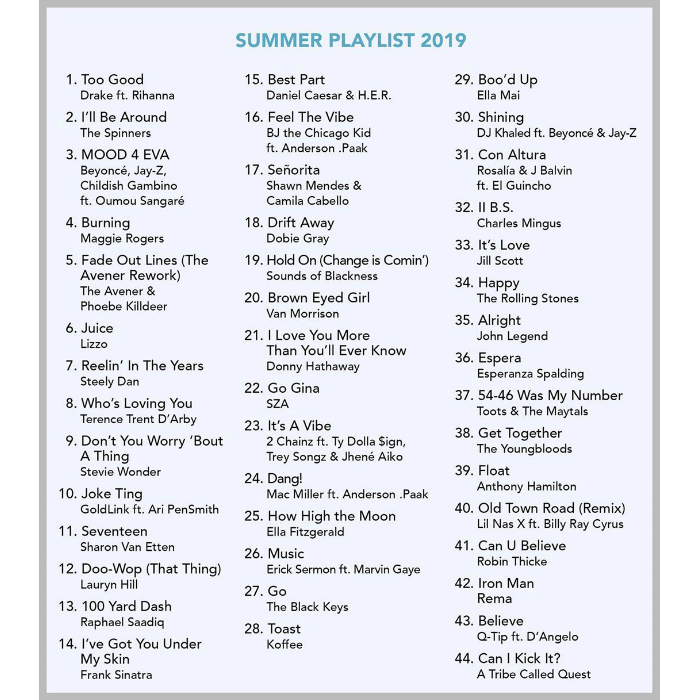 The list comes shortly after Barack recommended a collection of must-read books. “It's August, so I wanted to let you know about a few books I've been reading this summer, in case you're looking for some suggestions,” he wrote.

“To start, you can't go wrong by reading or re-reading the collected works of Toni Morrison. Beloved, Song of Solomon, The Bluest Eye, Sula, everything else — they're transcendent, all of them. You’ll be glad you read them,” he continued. “And while I’m at it, here are a few more titles you might want to explore.”

RELATED: Barack and Michelle Obama are the first presidential couple to do THIS!

It’s been a busy summer for the beloved family, who seem to be stepping further into the spotlight once again to spread some good. This past Wednesday, the pair’s new Netflix-partnered production company Higher Ground debuted its first project: American Factory. The documentary tells the story of workers struggling to unionize an auto-glass factory in Dayton, Ohio.