It's always a party when the Jonas Brothers attend a Hollywood event and bring their wives as plus ones (please see them totally fangirling at the Billboard Music Awards during the Jonas Bros comeback performance). Monday night, June 3, it was no different. Joe Jonas, Nick Jonas and Kevin Jonas brought their wives to the red carpet premiere of their documentary Chasing Happiness (now available to stream on Amazon Prime), and the three ladies ARRIVED. Priyanka Chopra, Sophie Turner and Danielle Jonas all looked stunning and—no surprise here—PDA levels were at a maximum at the Los Angeles event. 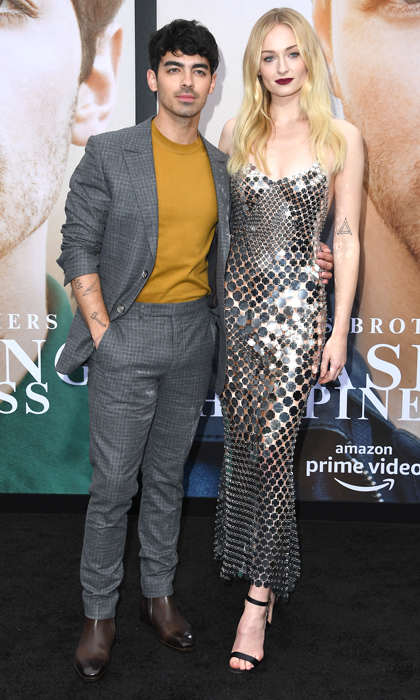 First up, Joe and Sophie were on point. The celebrity couple, who are scheduled to have a luxe wedding ceremony in France this summer, looked incredibly chic in modern getups. She wore a silver chainmail dress from Rabanne's Fall 2019 collection, while he wore a grey patterned suit paired with a yellow top.

MORE: All the details about Joe Jonas and Sophie Turner's upcoming wedding in France

Next, Priyanka and Nick were flawless. The actress rocked a black-sleeved gown from Israeli designer Galia Lahav, which featured  a crystal/mesh net around the neckline and thigh-high slit. The Sucker singer also opted for a dark look with a matching maroon jacket and pants combo. 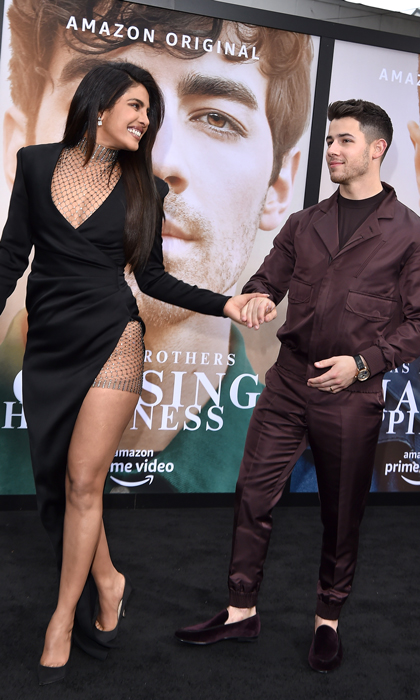 Finally, Danielle and Kevin dazzled on the carpet (and were the couple who participated in the most adorable PDA of the night!). The mother-of-two paired a nude-colored brassiere with a matching sheer maxi skirt, which featured glittered tassels. Kevin wore brown-patterned suit for the special occasion.

During the premiere, the three brothers shared how fortunate they are to have their wives accompany them for such a significant event. "It's a dream come true," Nick told ET. "They're all so busy that the fact that they get to come here and support us means the world."  Joe added: "We got them on their one day off!" 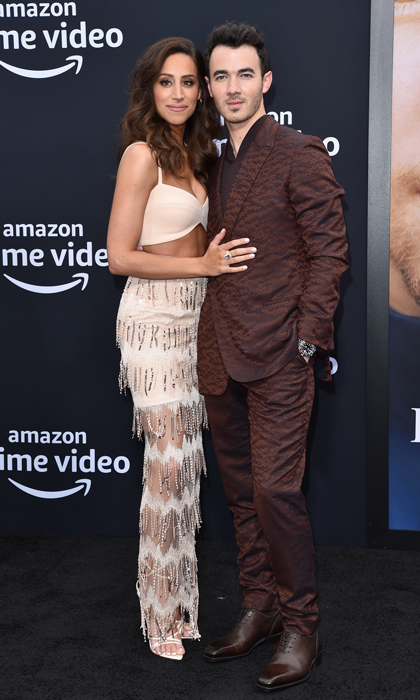 Chasing Happiness documents the band's rise, fall and eventual comeback as a band. It touches upon the harder moments the three brothers experienced when they broke up the band. “There definitely was [moments we thought our relationship wouldn't recover,]” Kevin admitted. “It took time, but after the initial shock of it all, it lead to a better relationship. This documentary really shows the come back together moment.”

Joe added: “I think what we learned over the last year, and what the doc shows quite a bit is that our relationship as brothers, as family, comes first,” he explained. “And, then the band – that comes second. It's important to us, obviously, but we have to make sure we have a healthy outlook on everything, and that ultimately makes us a lot more fun. And we enjoy the road a lot more.”