Salma Hayek’s little girl, Valentina Paloma, is all grown up. The 11-year-old, who very rarely makes a public appearance, is now a fashionista that goes to fashion week with her mom and dad, François Henri Pinault, who is the chairman and CEO of international luxury group, Kering, as well as President of Groupe Artémis. Given her fashion connections, Miss Valentina wears Gucci like it's no big deal! During Milan Fashion Week last week, the only child made her celebrity debut at her first ever fashion show with a catwalk presentation of the Italian brand owned by Kering.

The following day, she was spotted again except this time she was just with her mom outside the Bottega Veneta show. We have a feeling we’ll start seeing more of Valentina Paloma, but for now, here is what you need to know about Salma’s tween. 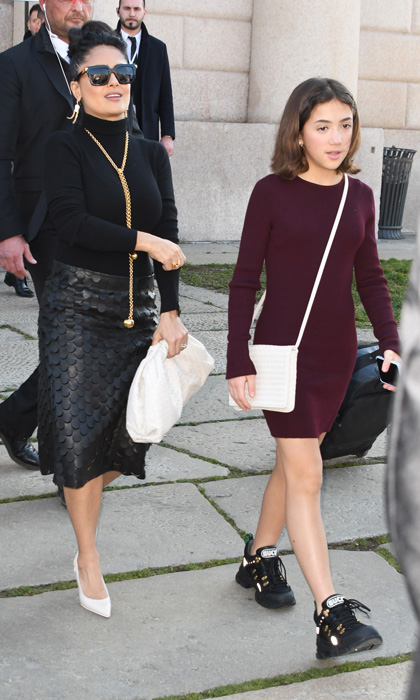 She’s 11 years old and enjoys cutting hair
Valentina’s birthday is September 21 and for her last birthday, Salma’s daughter cut her momma’s hair. The 52-year-old actress shared a clip on her Instagram account and captioned it with, “Happy birthday Valentina. You are so awesome and handy too! Thank you for cutting my hair! I love you more than love itself.”

She once had a slime-selling business
When she was only 9 years old, Valentina had already shown signs of one day becoming an entrepreneur thanks to her slime-selling business. The Frida actress once revealed on the Ellen DeGeneres Show that her daughter was into the slime craze and had even started selling it at her school. However, her side-gig likely came to an end after both Salma and her businessman husband told her it wasn’t right.

She hangs out with Alfonso Cuarón’s daughter
You know that video of Valentina cutting Salma’s hair on her birthday? Well, according to MSN, it was filmed and edited by none other than the Roma director’s 15-year-old daughter, Bu Cuarón. Its seems the two are friends.

She’s done humanitarian work in South Africa
In 2017 Valentina traveled to South Africa with her mom and half-sister from her father’s first marriage, Mathilde, to participate in World Aids Day on behalf of the organization, Mothers2Mothers. The Beatriz at Dinner star explained the trip was part of a learning experience for her then ten-year-old daughter. "We put her to work, participating in all kinds of dances and games and clapping, helping to stimulate the young children’s development,” she said.

Ariana Grande is her favorite singer
When news broke out about the terror attacks in Manchester during Ariana Grande’s concert in 2017, Hayek burst to tears during an interview at Cannes Film Festival as she revealed Ariana is her Valentina’s “favorite singer” and that her daughter could have easily been one of the victims from the tragic incident. "If it was in London, this concert, my daughter would have been in that concert. It's her favorite singer. My daughter's nine. She would have been there, with or without me,” said Salma.

She spent her tenth b-day at Disneyland Paris
Salma promised her daughter a celebration at Disneyland Paris for her tenth birthday and like a good mom she made Valentina’s dream come true. The Mexican actress took the birthday girl to the happiest place on earth where she got to see Mexican holiday decorations for El Día de los Muertos (Day of the Dead).