There’s a new superhero taking over the comic book world. Alexandria Ocasio-Cortez is the star of a new comic series by Devil’s Due. The history-making congresswoman is making her debut in Alexandria Ocasio-Cortez and the Freshman Force: New Party Who Dis?. On the cover, the Bronx-native wears her signature white pants suit and gold hoop earrings and she stands over an elephant while an anxious donkey stands in the background. Alexandria’s signature hoops are her key accessories. As for her weapon of choice, the politician holds her cellphone – which connects her to her over 3 million Twitter followers. 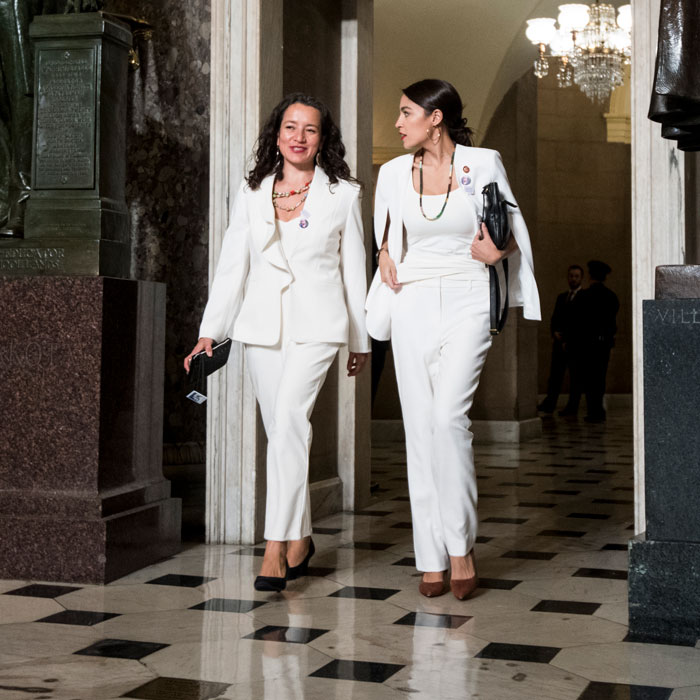 Alexandria Ocasio-Cortez and her white power suit are the stars of a new comic book series Photo: Getty Images

Josh Blaylock, creator of the series, told CNN his inspiration for the story. “There is just something about Alexandria that resonates with so many people,” he shared. Josh noted that the book is a collection of stories that center around the theme of change. “Some of the stories are really sweet,” Josh added. “Some are completely absurd and satirical. Some are cathartic and venting.”

MORE: See what got Alexandria Ocasio-Cortez so emotional during recent rally

Fans will be able to get their hands on the comic in May. Alexandria hasn’t publicly addressed the comic. However, the 29-year-old admitted to reading them. In January, Alexandria quoted the Watchmen in response to a critic calling her out on Twitter. Alexandria and her power suit made a statement earlier this month when stepped out in the white suit with a cape at the State of the Union address. The politician – who wore white in solidarity with the other women in congress – reminded the internet of another powerful woman in Washington, D.C.

“I stan @AOC and this white cape from the It’s Handled by Olivia Pope for the Olivia Pope Collection,” the hilarious tweet, which referred to Kerry Washington’s character from Scandal read Adding to her super attire was a pin with a message that rings true to the former bartender. The button read: “Well Behaved Women Rarely Make History.”