Valentine's Day is here. And with it comes news that five-year-old North West, daughter of Kim Kardashian and Kanye West, might have a boyfriend. The adorable celeb kid is making headlines for her sweet relationship with seven-year-old Caiden Mills, who is apparently a baller and already showering her with ultra-luxe Tiffany & Co. gifts. And Caiden just happens to be a fellow celebrity kid. 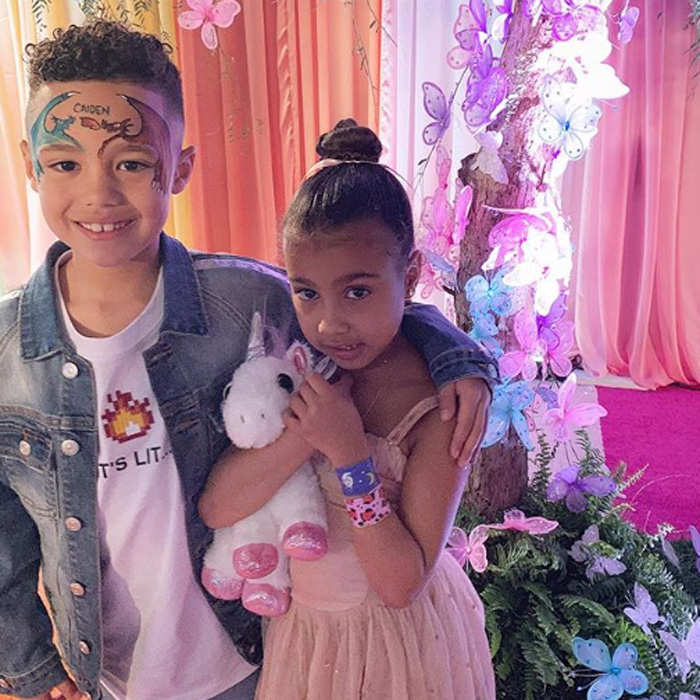 He is rapper Consequence's son, who's Instagram page is extremely engaging. He's made the relationship "Insta official" by posting several pictures of him and North paired with cute captions. Last week, he posted a picture of himself looking cool with a little blue Tiffany & Co. bag. "Shout out to Northie, Babygirl I’ll see you soon 😘😘😘," the caption on the post read.

MORE: The cutest PDA moments on the red carpet in honor of Valentine's Day

And remember the birthday extravaganza Kylie Jenner threw for Stormi's first birthday? According to Caiden's Insta, he and North were having tons of fun together with face paint and toy unicorns. He captured the moment and captioned, "Boo’d Up 🥰🥰🥰."

Today (Valentine's Day!), the seven-year-old shared another picture of himself carrying a box of chocolates and that Tiffany & Co. blue box with the caption, "Love Is In The Air 🥰🥰🥰." Was that a hint that little North is his Valentine?

And from what we can see, the mini Casanova gets along with North's family just perfectly. He attended Kanye's 15th anniversary celebration of The College Dropout earlier this week and 3-year-old Saint West tagged along as "third wheel" on a recent playdate.

To be honest, we're not surprised by this news considering that North is a modern style icon. In the meantime, we'll be here buying our own V-Day flowers.