When you are a celebrity, dating can be challenging. Stars can’t go out to a bar or coffee shop hoping to find a suitable mate without a potential match having a preconceived notion of who they are. With paparazzi following an A-lister's every move, dating is a public affair. That’s why celebrities will often date other stars.

While dating in the spotlight can be a frustrating experience, celebrities’ relationships with other stars can seriously boost their popularity. There are the lucky few that are almost equally famous (we are looking at you Brad and Angelina), and some who might have had their profiles boosted due to their significant other (non-sports fans got to know Kris Humphries thanks to Kim Kardashian). That’s why we explored certain celebrities’ Google Trends history to determine who has significantly benefited from their relationship post-breakup.

Who is More Popular Post-Breakup?

Surprisingly, both Marc Anthony and Jennifer Lopez earned a score of 100 on the day they were photographed wearing their wedding bands in June of 2004. During their breakup, they both maintained fairly high numbers, both in the 70 range. Marc Anthony gained more popularity post-breakup at a 294% increase from pre-breakup to post-breakup.

Eva Longoria and Tony Parker were together for over five years and split in November of 2010. Eva’s score stayed at 100 in both their engagement announcement and during their breakup, but in the end Tony Parker gained more popularity with an increase of 665%. 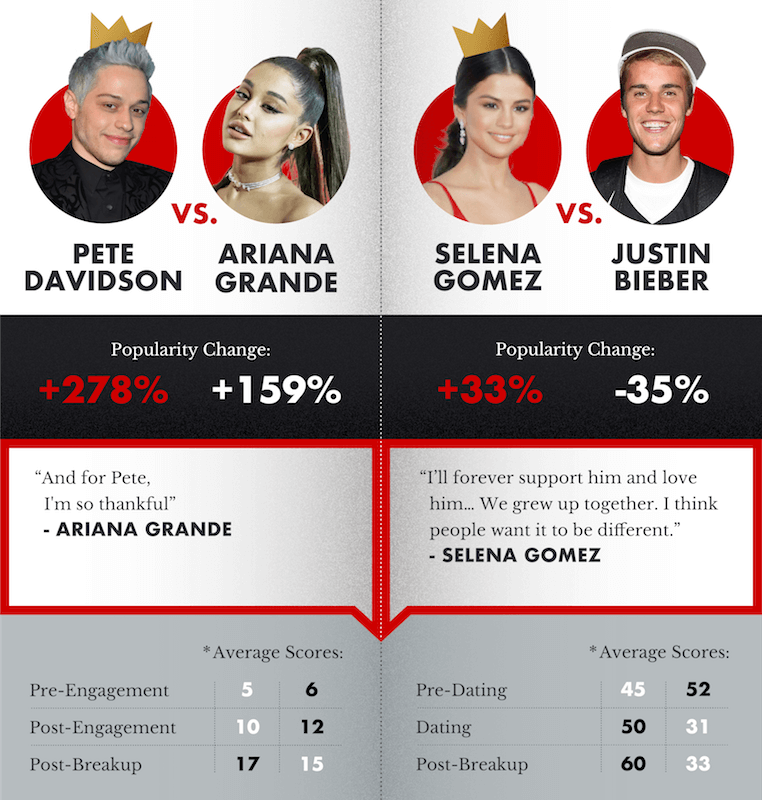 Between Ariana Grande and Pete Davidson, Pete gained more popularity after their breakup in October of 2018. While Ariana Grande was more popular throughout their relationship, Pete’s fame skyrocketed according to Google Trends at an increase of 278% from pre-breakup to post-breakup.

Justin Bieber and Selena Gomez’s results were almost polar opposite. While Justin Bieber’s popularity reached 100 in the month that the two of them made their first appearance, over time his score dropped down. Justin’s popularity was twice Selena’s during their first breakup, but plummeted  to 10 after their second breakup. Overall, while Bieber’s score stayed above Gomez’s throughout, Selena's popularity score weighed in much higher at a 33% increase. 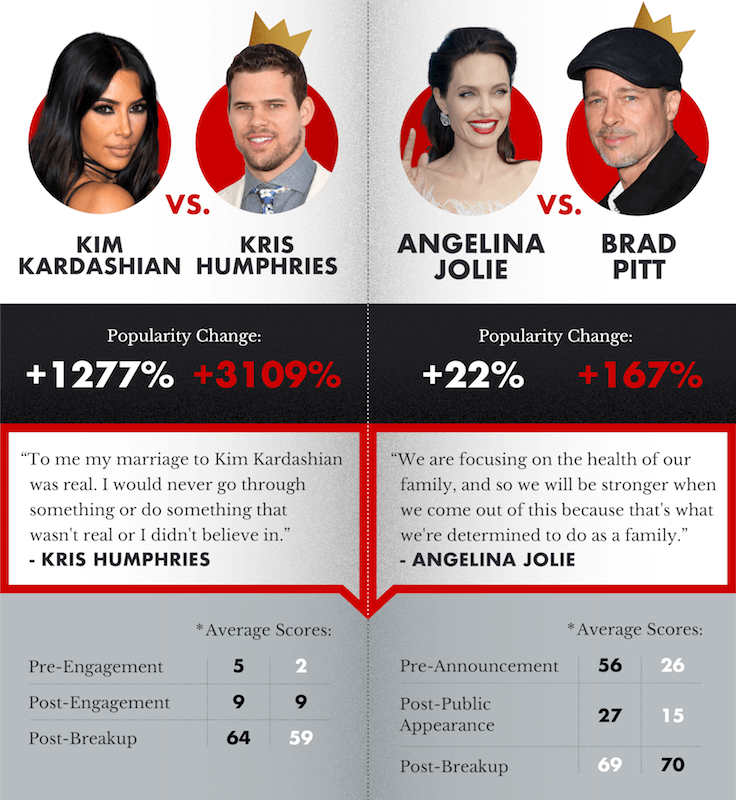 Kim Kardashian’s fame was beginning to gain momentum around the time she and Kris Humphries announced their engagement in May 2011. During their breakup announcement and post-split, both Kim’s and Kris’ scores grew tremendously. However, Kris’ popularity boost was more than double Kim’s at a 3109% increase in the month preceding their breakup.

The Brangelina duo after over a decade ended their marriage in September of 2016. Angelina Jolie scored an 80, while Brad Pitt scored 100 during their breakup. Post-breakup, Brad Pitt’s popularity score increased by 167% and Angelina's score increased by 22%. 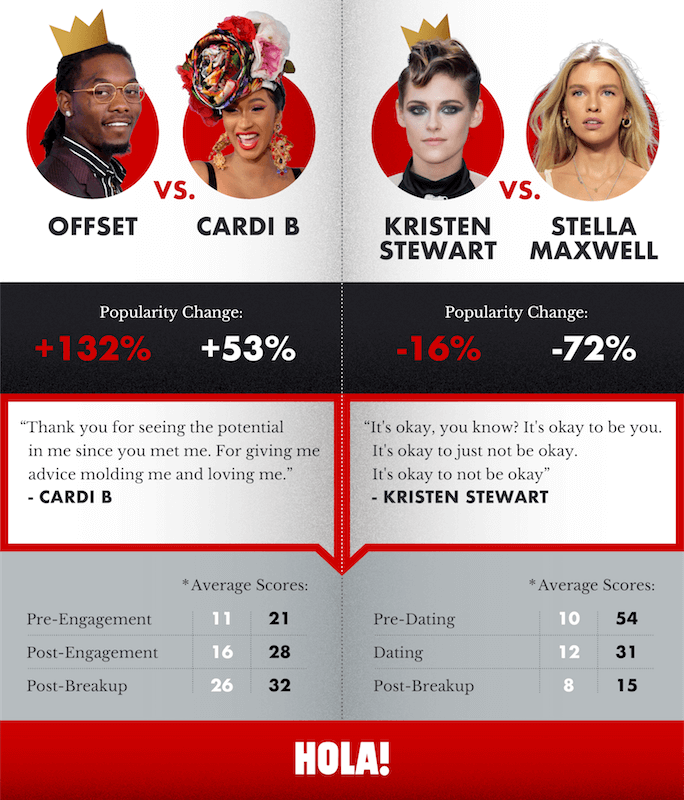 Cardi B & Offset had relatively low scores pre-engagement, but both saw a steady increase after their engagement announcement. Cardi B had slightly higher scores with a 32 post-breakup. Offset had a 26. However, Offset came in victorious with a popularity increase of 132% after their split.

Surprisingly, Kristen Stewart and Stella Maxwell both ended up decreasing in popularity post-breakup. We believe this is due to the limited social media presence about their relationship and staying relatively “off the grid” in terms of PDA. Kristen Stewart proved to be more popular of the two after the breakup.