Carrie Underwood is officially a mother-of-two! The Cry Pretty songstress and her husband Mike Fisher welcomed their second child – a baby boy – earlier this week. The American Idol alum took to her Instagram to reveal the news with her fans. “Jacob Bryan Fisher entered the world in the wee hours of the morning on Monday…his mom, dad and big brother couldn’t be happier for God to trust them with taking care of this little miracle,” the sweet post read. She continued: “Our hearts are full, our eyes are tired and our lives are forever changed. Life is good…” 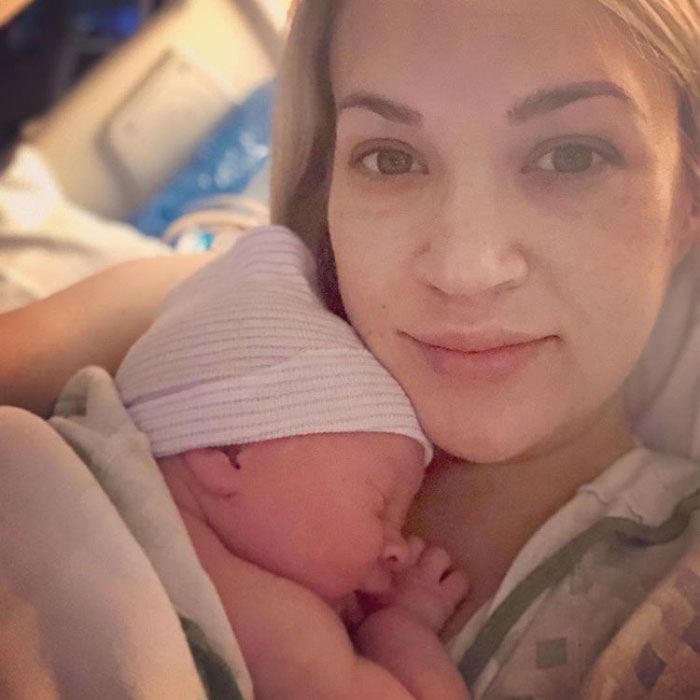 Along with the caption, the proud mom shared a picture of Mike holding on to their little boy as he smiles into the camera. In a follow up shot, the 35-year-old mommy gets on skin-to-skin with her sleeping newborn. In the third, and the sweetest shot, Carrie and Mike’s oldest son Isaiah, three, holds on to his little brother. Carrie, and the former NHL superstar revealed that they were expecting their second child in August.

The Love Wins singer revealed that she was expecting a son in November, during the 2018 CMA Awards. Over the summer, Carrie opened up about he family's expected transition with the arrival of her little man. “It’s going to be a different ball game, for sure,” she told the Tennessean.

“My brain is such a planner. I want to know how it’s all going to go. But no matter who you are, you make it happen, you make it work, you get your team behind you.” When asked if her and Mike’s three-year-old plans on stepping up as well, the songstress had no doubts. “I think he’ll be a really good big brother,” she said. “I think he’ll be helpful.”