Diamonds are a girl’s best friend and Chrissy Teigen had plenty of them! The model dressed the part and was the perfect Bond girl for her husband John Legend’s Casino Royale-themed 40th birthday party on Saturday, January 12. For the occasion, the 33-year-old turned heads in strapless gold sequin dress. While the look itself was breath-taking, it was the million dollars' worth of jewels that stole the show. Taking to her Instagram story, the mother-of-two shared a close up of her look. 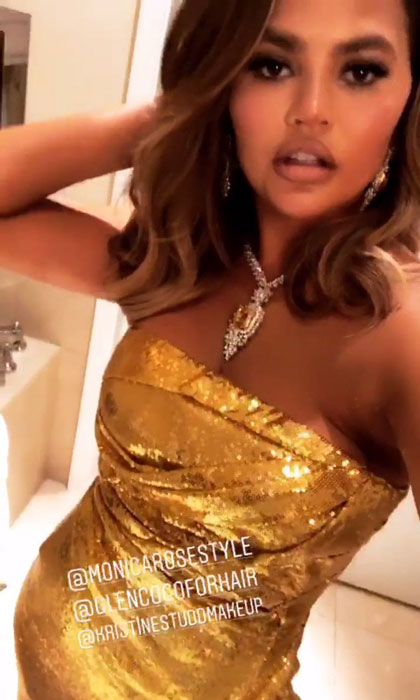 Chrissy panned the camera and showcased her Amwaj citrine and diamond earrings and necklace. The model’s glam was just as spectacular, with a deep smoky eye, nude lip and her tresses curled to perfection. Chrissy also showed off her jewels in a series of photos with friends. Kim Kardashian, who wore a sheer bodysuit by Alexander Wang, posted photos of her and husband Kanye West, joining the birthday boy and his wife in the photobooth. In the pics, Kim and Chrissy lay across a poker table, as their husband’s stand behind them.

Chrissy leans forward, putting her lavish neckwear on display. The model wasn’t the only one in her family to dress the part. The pair’s two-year-old daughter Luna wore a white sequin dress, while their seven-month-old son Miles was dapper in a tiny tux. The Cravings author took to social media, ahead of the party to ask for her dressing John’s mini-me.” “Okay guys, throwing John’s 40th birthday party tonight but need your help dressing mini-John, she wrote on Twitter. “Which one!”

MORE: Chrissy Teigen lays down the law when it comes to working for John Legend 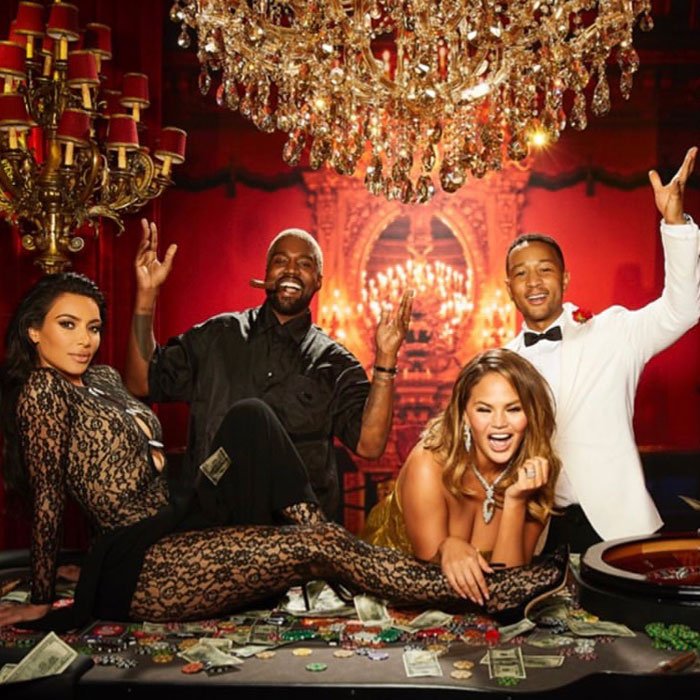 Miles was held by his grandma as he modeled a black tux in one photo and tiny white one in the next. The 040 party was held at Chrissy and John’s home in Beverly Hills. The bash was attended by a host of their famous friends, who dressed the part, including Kris Jenner, Corey Gamble, Jessie Tyler Ferguson and Kourtney Kardashian, who stunned in a revealing pantsuit by Jean Paul Gaultier.